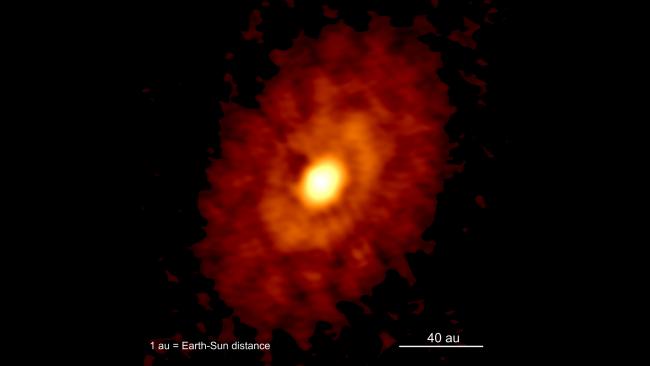 Cambridge, MA - An international team of scientists has discovered planet formation in a star system younger than 500,000 years old. The find, published today in Nature, is a marked departure from previously accepted theories of planet formation, and indicates that stars and planets grow up together like siblings.

Rings of dust have previously been detected in great numbers in systems older than one million years, and prior to the study, scientists believed that stars are well into adulthood before planets to begin to form. Observations of IRS 63—a young protostar located 470 light years from Earth, deep within the dense LI709 interstellar cloud in the constellation Ophiuchus—revealed that this may not be the case after all. At less than half the age of other young stars with dust rings—and younger than 500,000 years old—IRS 63 has a long way to go in gathering mass, and yet, planets have already begun to form.

"We observed the young protoplanetary disk called IRS 63 and found gaps and rings within the disk, which is indicative of planet formation," said Ian Stephens, astronomer, Center for Astrophysics | Harvard & Smithsonian (CfA). "Traditionally it was thought that a star does most of its formation before the planets form, but our observations showed that they form simultaneously." Dominique Segura-Cox, a scientist at the Max Planck Institute for Extraterrestrial Physics (MPE) in Germany and the lead author on the study added, "The rings in the disk around IRS 63 are so young. We used to have this idea that stars entered adulthood first and were the mothers of planets that came afterwards, but now we see that protostars and planets grow and evolve together from early times like siblings."

Observations also revealed implications for understanding the formation of our own solar system. It takes at least 10 Earth masses of solid material to form a planet core capable of accreting enough gas to form a gas giant. While researching IRS 63 scientists found that the young disk contains roughly 150 Earth masses of dust and material. Paired with the rings and gaps present in the disk, scientists are learning a lot about the early formation of planets, including those in our own solar system. "These rings and gaps suggest that we are seeing the earliest evidence of planet formation, and that planets certainly start to form within the first half million years, and probably within the first 150,000 years," said Stephens. "Planets, especially planets like Jupiter, started their own formation at one of the earliest stages of the star formation process."

There is growing evidence that Jupiter may have formed beyond Neptune's orbit in our own solar system, and then migrated over time to its present-day position. Observations of IRS 63 indicate that the amount of material in the disk and the young age of the system could create conditions similar to those in our solar system, allowing for similar formation of planets. “The size of the disk is very similar to our own solar system,” said Segura-Cox. "Even the mass of the protostar is just a little smaller than the mass of our Sun. Studying such young planet-forming disks around protostars can give us important insights into our own origins."