Astronomers have presented a new explanation for the mysterious downward-moving dark voids seen in some solar flares. 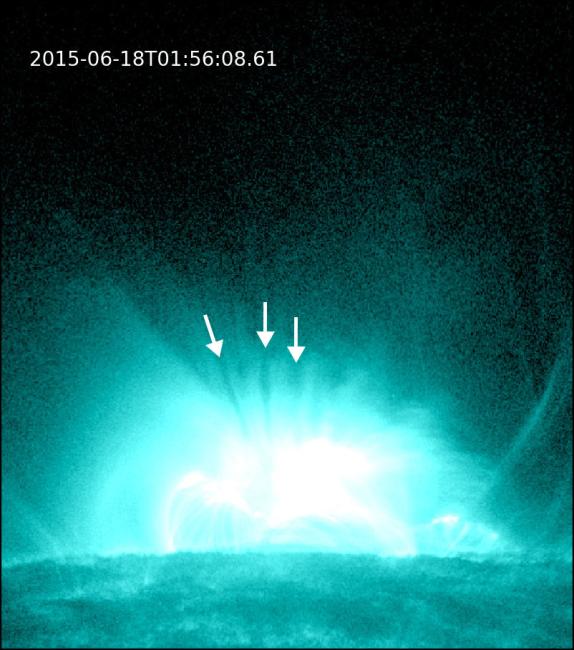 Unlike typical flares that showed bright energy erupting outwards from the Sun, this solar flare also displayed a downward flow of motion, as if material was falling back towards the Sun. Described as "downward-moving dark voids," astronomers wondered what exactly they were seeing.

Now, in a study published today in Nature Astronomy, astronomers at the Center for Astrophysics | Harvard & Smithsonian (CfA) offer a new explanation for the poorly understood downflows, now referred to as supra-arcade downflows (SADs) by the scientific community.

"We wanted to know how these structures occur," says lead author and CfA astronomer Chengcai Shen, who describes the structures as "dark finger-like features." "What's driving them and are they truly tied to magnetic reconnection?"

The Atmospheric Imaging Assembly (AIA) onboard NASA's Solar Dynamics Observatory captures a supra-arcade downflow within a solar flare that occurred on Nov. 29, 2020.

Scientists have assumed that SADs are tied to magnetic reconnection since their discovery in the 90s. The process occurs when magnetic fields break, releasing fast moving and extremely energetic radiation, and then reform.

"On the Sun, what happens is you have a lot of magnetic fields that are pointing in all different directions. Eventually the magnetic fields are pushed together to the point where they reconfigure and release a lot of energy in the form of a solar flare," says study co-author and CfA astronomer Kathy Reeves.

Reeves adds, "It's like stretching out a rubber band and snipping it in the middle. It's stressed and stretched thin, so it’s going to snap back."

Scientists assumed the dark downflows were signs of the broken magnetic fields "snapping back" to the Sun after a solar flare eruption.

But there was a catch.

Most of the downflows observed by scientists are "puzzlingly slow," says co-author Bin Chen, an astronomer at the New Jersey Institute of Technology.

Shen explains, "This is not predicted by classic reconnection models, which show the downflows should be much quicker. It's a conflict that requires some other explanation."

To find out what was happening, the team analyzed downflow images captured by the Atmospheric Imaging Assembly (AIA) onboard NASA's Solar Dynamics Observatory. Designed and built partially at the CfA and led by the Lockheed Martin Solar Astrophysics Laboratory, the AIA takes images of the Sun every twelve seconds in seven different wavelengths of light to measure variations in the Sun's atmosphere.

They then made 3D simulations of solar flares and compared them to the observations.

The results show that most SADs are not generated by magnetic reconnection after all. Instead, they form on their own in the turbulent environment and are the result of two fluids with different densities interacting.

Reeves says scientists are essentially seeing the same thing that happens when water and oil are mixed together: the two different fluid densities are unstable and ultimately separate.

"Those dark, finger-like voids are actually an absence of plasma. The density is much lower there than the surrounding plasma," Reeves says.

The team plans to continue studying SADs and other solar phenomenon using 3D simulations to better understand magnetic reconnection. By understanding the processes that drive solar flares and eruptions from the Sun, they may ultimately help develop tools to forecast space weather and mitigate its impacts.

Additional co-authors on the paper are Xiaoyan Xie of the CfA; Sijie Yu of the New Jersey Institute of Technology; and Vanessa Polito of the Bay Area Environmental Research Institute.

This research was supported by grants from the National Science Foundation.