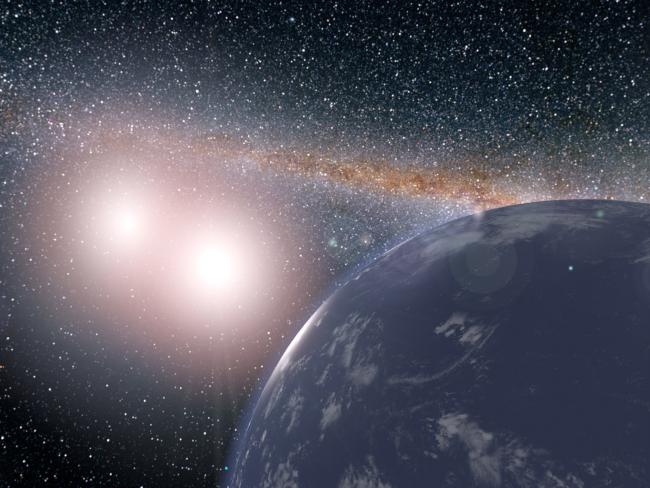 An artist's conception of a putative water world - an Earth-size exoplanet completely covered in water - based on the example of the binary star system Kepler-35A and B.

There are currently about fifty known exoplanets whose diameters range from Mars-sized to several times the Earth's and which also reside within their stars' habitable zone – the orbital distance within which their surface temperatures permit liquid water. These exoplanets are currently our best candidates for hosting life.

When, however, an exoplanet in the habitable zone has tens of percent of its total mass as water, and if it lacks an atmosphere with hydrogen or helium gas, it is called a "water world." Some scientists have argued that water worlds are unlikely sites for life. They lack the land surface that drives the carbonate-silicate cycle, a process in which carbon dioxide gas, thought to be essential to maintain hospitable surface temperatures, is balanced between the atmosphere and the planet's interior. CfA astronomer Amit Levi and his colleague have reanalyzed the physical and geological mechanisms in water worlds. They find that when the pressure of atmospheric carbon dioxide is high enough, sea ice can become enriched in chemicals other than water and sink, driving a planetary current that in effect rebalances the gas pressure in a way roughly analogous to the carbonate-silicate cycle.

These scientists find that for this effect to work, the planet needs to rotate about three times faster than the Earth; this enable a polar ice cap to develop and produce a temperature gradient in the ocean which helps sustain the mechanism. In addition, this temperature gradient will support freeze-thaw cycles necessary for the evolution of life on water worlds, according to constraints from prebiotic chemistry. They calculate a new "habitable zone" for this process around Sun-like and smaller stars; it generally falls within the boundaries of the usual habitable zone range. In conclusion, they note that for very small stars (smaller than about half the size of the Sun) the mechanism would not work because exoplanets in its habitable zone are probably tidally locked to the star and always have the same face towards the star.