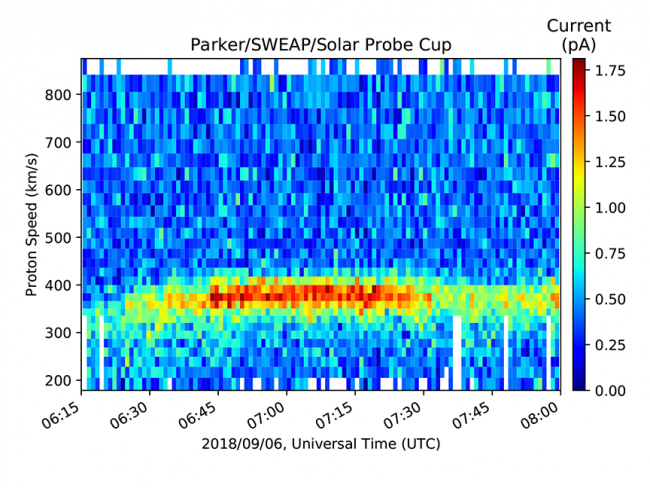 Just over a month into its mission, Parker Solar Probe has returned first-light data from each of its four instrument suites. These early observations – while not yet examples of the key science observations Parker Solar Probe will take closer to the Sun – show that each of the instruments is working well. The instruments work in tandem to measure the Sun's electric and magnetic fields, particles from the Sun and the solar wind, and capture images of the environment around the spacecraft.

"All instruments returned data that not only serves for calibration, but also captures glimpses of what we expect them to measure near the Sun to solve the mysteries of the solar atmosphere, the corona," said Nour Raouafi, Parker Solar Probe project scientist at the Johns Hopkins University Applied Physics Lab in Laurel, Maryland.

The mission's first close approach to the Sun will be in November 2018, but even now, the instruments are able to gather measurements of what’s happening in the solar wind closer to Earth. Let’s take a look at what they’ve seen so far.

Because of Parker Solar Probe’s position and orientation, the science team expected that Solar Probe Cup would mostly measure background noise at first, without picking up the solar wind. But just after the instrument was powered on, a sudden, intense gust of solar wind blew into the cup, visible in the data as the red streak. As the spacecraft approaches the Sun, such observations will be Solar Probe Cup’s bread and butter — and will hopefully reveal new information about the processes that heat and accelerate the solar wind.

The two Solar Probe Analyzers (SPAN) also caught early peeks of the solar wind. During commissioning, the team turned the spacecraft so that SPAN-A — one of the two SPAN instruments — was exposed to the solar wind directly. It captured about 20 minutes' worth of data (right), including measurements of solar wind ions (top) and electrons (bottom). While SPAN-A and its sister instrument, SPAN-B, will measure solar wind electrons throughout the mission, the spacecraft’s orientation now means that SPAN-A will likely go several more years before it captures such ion measurements again. This is because solar wind electrons can be measured from any direction, as their low mass and high temperature make their motion much more random, while the much heavier solar wind ions follow a relatively direct path out from the Sun.

"SWEAP's solar wind and corona plasma instrument performance has been very promising," said Justin Kasper, principal investigator of the SWEAP instrument suite at University of Michigan. "Our preliminary results just after turn-on suggest we have a set of highly sensitive instruments that will allow us to do amazing science close to the Sun."

The full NASA blog post on the Parker Solar Probe’s first light images, including from its other instrument packages, can be found at https://blogs.nasa.gov/parkersolarprobe/2018/09/19/illuminating-first-li...