Massive Galaxies in the Early Universe 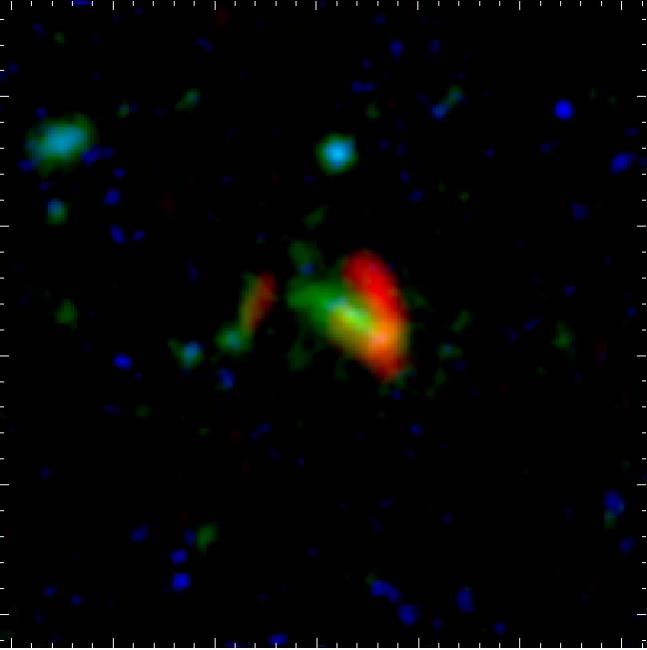 The giant galaxy SPT0311-58, dating only 780 million years after the big bang. This false-color composite image combines near infrared Hubble (green and blue) and millimeter ALMA (red) images. With a mass of about 100 billion solar-masses, this galaxy in the very early universe is seen merging with a less massive neighbor and producing stars at a rate of about 2900 solar masses per year.

The South Pole Telescope (SPT) is a 10-meter-diameter telescope in the Antarctic that has been operating at millimeter- and submillimeter-waves for a decade; the CfA is an institutional member of the collaboration. For the past six years it has been surveying the sky in a search for galaxies in the first few billion years of cosmic history; they are thought to be preferentially detectable at these wavelengths because their dust has been heated by the ultraviolet light of young stars. One of SPT discoveries, the galaxy SPT0311–58, has upon further investigation turned out to date from an epoch a mere 780 million years after the big bang. It is the most distant known case of this postulated but previously undetected population of optically dim but infrared luminous clusters.

CfA astronomers Chris Hayward, Matt Ashby and Tony Stark are members of the SPT team that made the discovery and then followed up with the Spitzer Space Telescope, the ALMA array, the Hubble Space Telescope, and the Gemini optical/infrared telescope. The scientists were able to determine the cluster's distance and epoch from the redshift of its spectral features, including a line of ionized carbon, and to characterize the overall emission properties across a wider range of wavelengths. The Spitzer and Hubble images of the source revealed the presence of a foreground galaxy that is acting as a gravitational lens to magnify SPT0311-58 and thus greatly facilitated its detection. The ALMA measurements at high spatial resolution found that the original source is actually two galaxies less than twenty-five thousand light-years apart. The implication is that these two galaxies are in the midst of colliding.

The masses of the two galaxies are nearly one hundred billion and ten billion solar masses, respectively. The larger one is more massive than any other known galaxy at this early time in cosmic evolution, a period during which many galaxies are thought to be just forming, and is very bright, making new stars at a rate of about 2900 solar masses per year (thousands of times faster than the Milky Way). Although current models of cosmic evolution do not preclude such giant systems from existing at such early times, the observation does push the models to its limits. The results also imply that there should be a dark-matter halo present with more than 400 billion solar masses, among the rarest dark-matter haloes that should exist in the early universe.