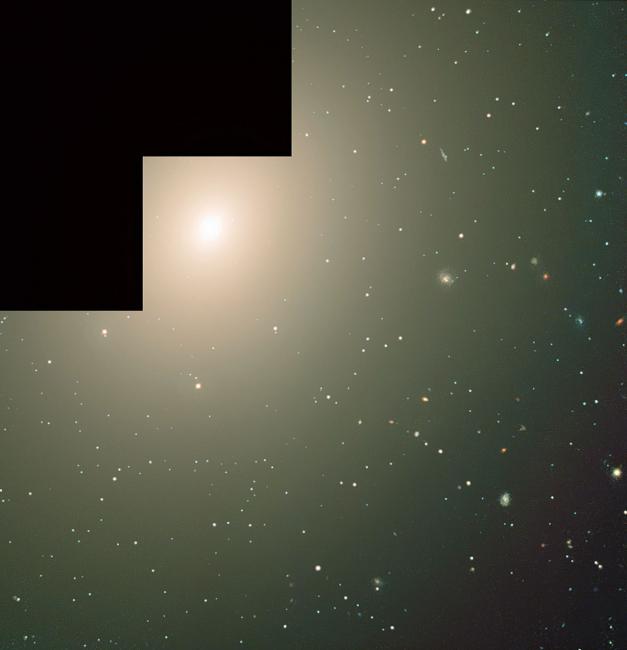 The galaxy NGC 4365 in the Virgo supercluster of galaxies, showing its many globular clusters (most of the more than one hundred dots in this image are actually globular star clusters). A new study of over seven thousand globular clusters around ten Virgo galaxies finds that they are often gathered into distinct groupings whose shapes reflect the formation of the clusters and the histories of the galaxies.

The Virgo Cluster of galaxies, containing between one and two thousand galaxies, is located about fifty-four million light-years away in the direction of the constellation of Virgo. The ten brightest galaxies of the Virgo Cluster alone contain 7053 detected globular clusters. CfA astronomers Raffaele D'Abrusco, Pepi Fabbiano, and Andreas Zezas carefully examined this set of globular clusters looking for information about the history of these galaxies. In a new paper, they report discovering distinctive structures among the globular cluster systems, meaning that the globular clusters around these galaxies are not distributed symmetrically. Their configurations often take shapes ranging from roughly linear to circular, with some more complex shapes as well. The scientists found 229 such structures in this subsample, forty-two of them classified as being medium or large and stretching over as much as seventy-five thousand light-years. The elongated structures tend to be aligned with an axis of the host galaxy, as would be expected if a merger were responsible.

The scientists argue that these structures are indeed the remnants of galaxies that were accreted in the past, and among other things they estimate limits on the masses of these parent galaxies. Computer simulations provide some rough level of agreement. The authors note that with more detailed computations, these structures offer a powerful new tool to advance the study of galaxy evolution.