The Sloan Digital Sky Survey continues its twenty-year legacy of wide-field optical/infrared imaging and spectroscopy, which has led astronomy into the era of large archives and data science. Harvard and Smithsonian are both full institutional members of the latest epoch of the survey, SDSS-V, which started observations in 2020. 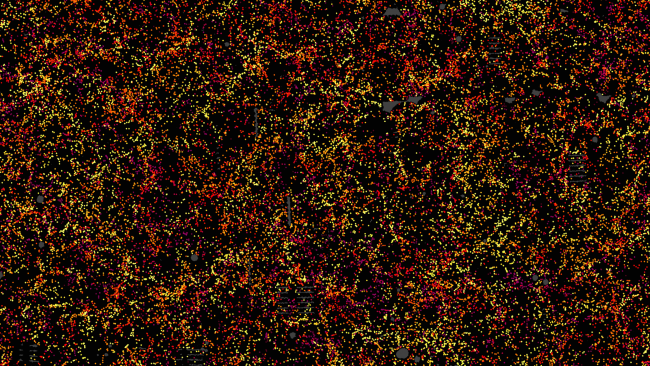 This is one slice through the map of the large-scale structure of the Universe from the Sloan Digital Sky Survey and its Baryon Oscillation Spectroscopic Survey. Each dot in this picture indicates the position of a galaxy 6 billion years into the past.

Galaxies are highly clustered, revealing superclusters and voids whose presence is seeded in the first fraction of a second after the Big Bang. This image contains 48,741 galaxies, about 3% of the full survey dataset. Grey patches are small regions without survey data.

Daniel Eisenstein and the SDSS-III collaboration

The Sloan Digital Sky Survey is a long-running series of sky surveys, now focused on optical and infrared spectroscopy of the full sky. Harvard and Smithsonian are both full institutional members of the latest epoch of the survey, SDSS-V, which started observations in 2020. SDSS-V is composed of three major parts: the Milky Way Mapper, the Black Hole Mapper, and the Local Volume Mapper.

The SDSS archive, with over 20 years of data, is one of the most heavily used data sets in modern astronomy.  Previously, Harvard and Smithsonian were members of SDSS-IV and SDSS-III.  Prof. Daniel Eisenstein served as Director of SDSS-III from 2007 to 2015, and was active in the Baryon Oscillation Spectroscopic Survey (BOSS).  Dr. Paul Green was a principal designer of the Time-Domain Spectroscopic Survey (TDSS) component.  Prof. Charlie Conroy was active in the Apache Point Observatory Galaxy Evolution Explorer (APOGEE) and Mapping Nearby Galaxies at APO (MaNGA) components.