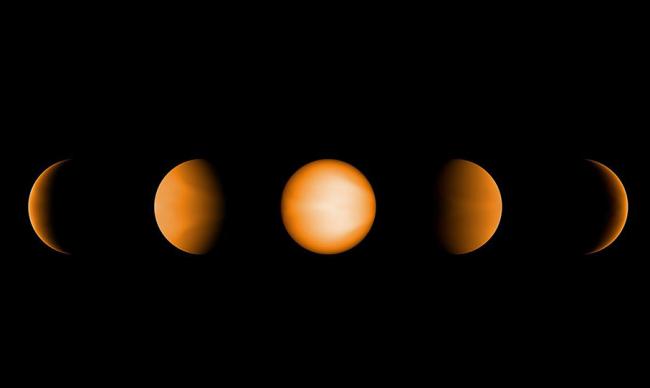 These simulated views of the ultrahot Jupiter WASP-121b show what the planet might look like to the human eye from five different vantage points, illuminated to different degrees by its parent star. The images were created using a computer simulation being used to help scientists understand the atmospheres of these ultra-hot planets.

A new paper by Laura Kreidberg from the Harvard-Smithsonian Center for Astrophysics (CfA) reports observations of the ultra-hot Jupiter WASP-103b by NASA's Hubble Space Telescope (HST) and Spitzer Space Telescope. The researchers estimate the dayside temperature of the planet is 4800 degrees Fahrenheit (2700 degrees Celsius) making it one of the hottest exoplanets known. The nightside temperature of the planet is much cooler, at 2900 degrees Fahrenheit (1600 degrees Celsius).

Unlike the case for cooler hot Jupiters, Kreidberg and collaborators do not detect any sign of water vapor in WASP-103b using Hubble data. As explained in papers led by Vivien Parmentier, Jacob Arcangeli and Megan Mansfield, and the JPL press release, the water is being torn apart by radiation from the planet’s host star. However, Kreidberg and collaborators do detect evidence for carbon monoxide on the dayside of WASP-103b using Spitzer data. This is a much hardier molecule than water.

They also detect evidence for a temperature inversion, formed by the same mechanism as temperature inversions on the Earth. In both planets this effect is caused by ultraviolet radiation being absorbed in the upper atmosphere, causing it to become hotter. In the case of Earth, ozone is the molecule most responsible for the absorption, while in the case of WASP-103b sodium might be responsible or perhaps exotic molecules like titanium or vanadium oxides.

A crucial observational advance by Kreidberg and her team was that they observed the planet for an entire orbit, enabling them to map the climate at every longitude and derive detailed information about the temperatures on the planet’s dayside and nightside. This is only the second time that such a complete exoplanet observation has been performed with HST.

"WASP-103b is unlike anything in our Solar System," said Kreidberg. "It orbits right next to its parent star -- less than 2 million miles, 20 times closer than Mercury is to the Sun. The planet completes a full orbit (its "year") every 22 hours, and the strong pull of its star's gravity distorts it into an egg-like shape. It's heated up on the permanent hot dayside to 4800 degrees F, which is hotter than many stars. You definitely wouldn't want to live there! And yet in some ways, the planet isn't so exotic -- we found that it has a thermal inversion in its atmosphere that formed in a very similar way as the stratosphere on Earth. It serves as a reminder that even on the most unwelcoming of extrasolar worlds, they're still subject to the same laws of physics and chemistry that we abide by here on Earth.”

The Kreidberg et al. paper is available online and has been published in The Astronomical Journal.

A press release from the Jet Propulsion Laboratory ("Water is Destroyed, then Reborn in Ultrahot Jupiters") issued on August 8, 2018 outlines the results from the Kreidberg and three other papers, which include: