A New Set of Solar Systems 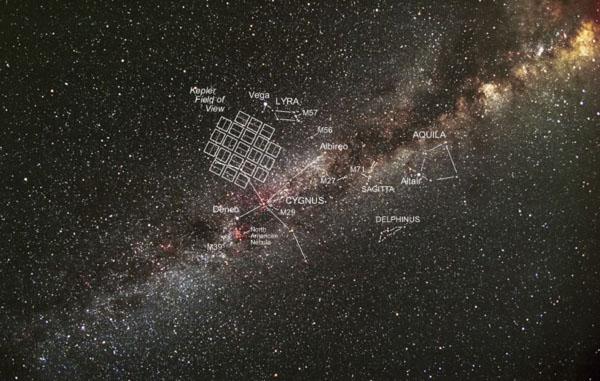 The field of view of the Kepler satellite, superposed on an optical image of the sky. A new Kepler study has found thirteen stellar systems containing twenty-seven exoplanets.

Astronomy's dramatic program to find planets around other stars now reports 859 confirmed exoplanets. One hundred twenty-eight of them are located in systems where multiple objects orbit a star, as in our solar system (in a few cases exoplanets orbit a pair of stars). The planets in our solar system affect one another through their gravitational
attraction, something that has been appreciated for well over a century. For example, their mutual gravity has synchronized the orbits of Pluto and Neptune such that Pluto completes two orbits in the time it takes Neptune to make three orbits, a so-called two-to-three resonance. Other examples of gravitational resonances are found among the satellites orbiting planets, in particular Jupiter and Saturn.

The effects of mutual interactions have also been seen in exoplanet systems. The transit method of exoplanet discovery monitors a planet's passage across the face of the star as seen from Earth, as the star's light is slightly dimmed for a short time. In multiple exoplanet systems, astronomers have seen and modeled transits that do not occur at fixed time intervals because of the influence of other planets in the system. These so-called "transit timing variations" allow scientists to
infer directly the gravitational influence of the system's planets on each other -- that is, their masses -- something not derivable from transit information in a system with a single planet.

A team of astronomers including Elisabeth Adams and Andrea Dupree from the CfA has now used the transit timing variation method to confirm the existence of twenty-seven planets in thirteen systems. By looking for statistically significant timing transit variations, the scientists can
demonstrate when faint hints of a transit indeed represent real companions within the same stellar system. Among the thirteen new systems with multiple planets, the team reports finding six whose planets are in a one-to-two resonance with each other; the other seven systems have various other orbital resonances. The new results not only add to the growing list of exoplanet systems, they demonstrate a powerful new technique to confirm the reality of suspected multi-planet systems.