The force of gravity holds Earth and other planets in predictable orbits around the Sun. Gravity also produces more complicated and even chaotic behaviors, particularly where three or more bodies interact. The mutual attraction between planets and moons creates orbital resonances, moving bodies around inside a star system. In many cases, these interactions can even eject a planet from a solar system — or kick a star out from a galaxy. Gravitational dynamics is the study of the interplay of multiple astronomical objects, revealing how stable or not a system can be. 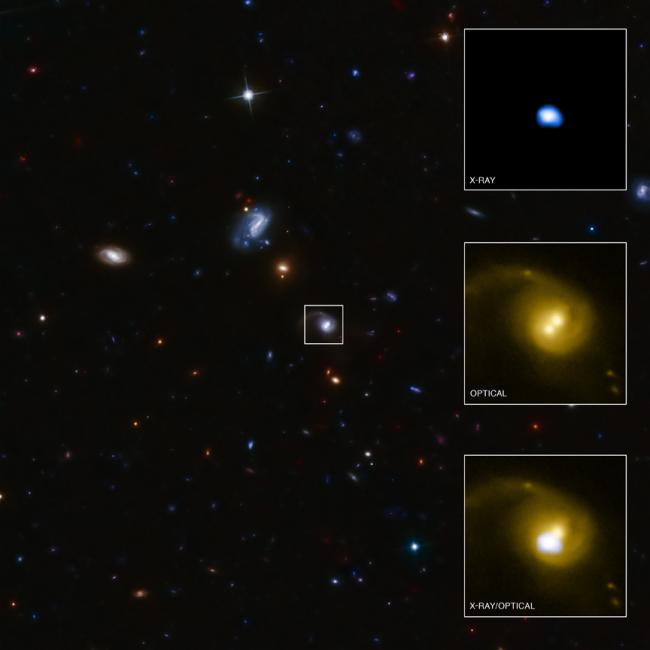 NASA's Chandra X-ray Observatory and Hubble Space Telescope captured a runaway black hole, which can be seen here as a bright spot in X-ray light. Researchers think the complex gravitational interactions during the collision of two galaxies kicked one of the supermassive black holes out.

Starting hundreds of years ago, astronomers have observed interesting patterns in the moons of Jupiter, the rings of Saturn, and the asteroid belt. These patterns include gaps — places where few or no bodies orbit — and orbit lengths that occur in distinct ratios. Astronomers realized these patterns came about from gravitational interactions between more than two objects together. Gaps in the asteroid belt rose from the tug of both the Sun and Jupiter on asteroids; the orbits of Jupiter’s moons were the result of each moon tugging on the others.

Today, multi-body gravitational interactions are an essential concept in understanding the Solar System, exoplanet systems, star clusters, and other environments. Researchers apply gravitational dynamics to models of planet formation and the long-term stability of star systems.

Astronomers also use gravitational effects to look for small exoplanets and even exomoons: moons orbiting planets in other star systems. If the exoplanet transits its host star — passing between the star and us — it blocks the star’s light briefly. Measuring this transit over several orbits, astronomers can measure the effect of another object tugging on it, either slowing or speeding its eclipse. This is a very tiny and hard to measure effect, but it can reveal the existence of exoplanets too small to create their own measurable transits.

The orbits of the eight planets in the Solar System seem to be very stable. However, that may not always be true: each planet nudges every other one slightly every time they pass each other. Those nudges could potentially add up to change planets’ orbits, or even knock one of the worlds out of the Solar System entirely. It’s even possible the early Solar System had one or more extra planets that got kicked out billions of years ago.

Our own star system aside, astronomers have discovered a small number of “rogue planets”: planets that don’t orbit a star, but drift through interstellar space. Similarly, in the fall of 2017, a small asteroid or comet passed by Earth that may have originated outside the Solar System. These likely formed in other star systems and were ejected thanks to gravitational dynamics.

An even more dramatic example of gravitational ejection involves “hypervelocity stars”. Astronomers have identified a number of stars moving away from the center of the Milky Way at an astounding 3 million kilometers per hour, or 2 million miles per hour. The most likely hypothesis: hypervelocity stars were once part of binary systems, when they drifted too close to the supermassive black hole at the center of the Milky Way. Gravitational dynamics made the binaries unstable, with the black hole pulling one star in and kicking the other one out of the galaxy at those phenomenal speeds.