The Origin of the Moon's Craters 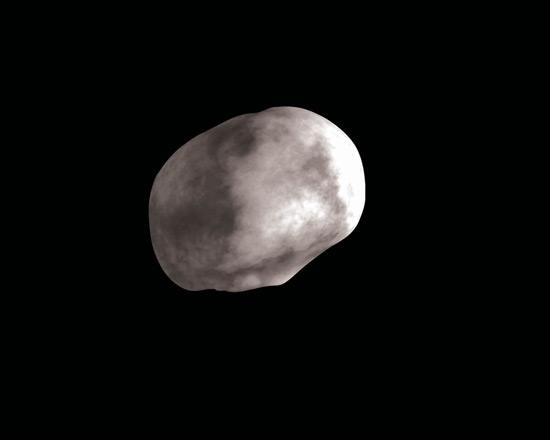 A Hubble image of the asteroid Vesta. A new paper on the origins of the Moon's craters proposes that asteroids from the neighborhood of Mars, some as large as Vesta, could have been responsible.

Moon's craters, together with samples of the surface returned during the Apollo program, tell the story of impacts from two different populations of small bodies. The first rocky collection was gradually depleted over time: About 3.85 billion years ago (the Moon formed about 4.5 billion years ago) there was a cataclysmic heavy bombardment of material onto the surface that lasted only a few hundred million years. The second collection of bodies appears not to have been depleted, however, and their impacts have continued at a steady pace. We observe this latter group today as Earth-orbit-crossing objects, and their numbers are apparently renewed at about the same rate that they are lost. All these details are important to our understanding of the Moon, the history of the bombardment of the Earth by the same populations of asteroids, and - not least - to a better understanding of how the solar system evolved and thus how planetary systems around other stars might look during different stages of their evolution.

One of the outstanding questions in the study of lunar impacts has been where these two sets of bodies came from - especially the population that caused what is known as the heavy bombardment. If it were primordial (dating from the early days of the solar system itself), then to cause a heavy bombardment so suddenly the collection must have been disrupted into an unstable configuration, probably by some kind of migration of the planets in their orbits. What caused that migration is not known. But if the collection was not primordial, then where did it come from?

CfA astronomer Matija Cuk offers a new, if still tentative, explanation in the latest issue of the journal Icarus. The details are complicated, but in summary he argues that the data do not support the idea of a simple disruption by planetary migration. Those data include a revised measurement of the size distribution of lunar craters, and the local magnetic fields on the Moon. Cuk proposes that most of the likely impactors came from a population of small, primordial objects whose orbits crossed the orbit of Mars - but not the orbits of either Earth or Jupiter. These objects would have had only slightly unstable configurations because Mars is relatively small, and so provide an intermediate class of solution. Numerical simulations of the behavior of this collection of asteroids suggests that they could have produced most of the lunar craters; the collisional breakup of one very large body in this group and the subsequent impacts from its debris could explain many other features. The new hypotheses need to be confirmed with improved data on lunar craters and asteroid compositions, but directly address some basic puzzles of lunar history.