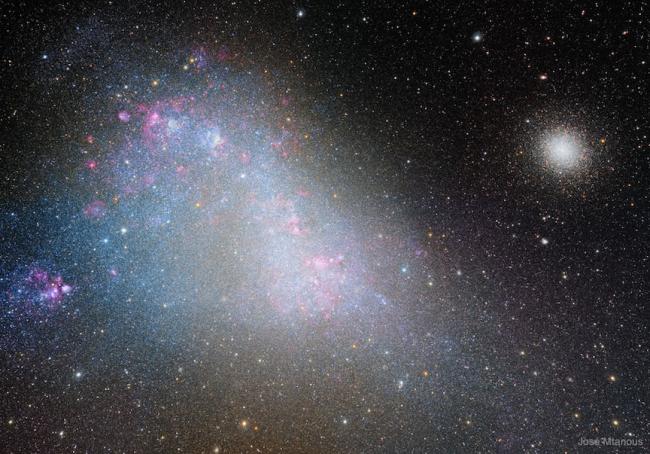 A photograph of the Small Magellanic Cloud, a nearby dwarf galaxy that is merging with the Milky Way. (The foreground globular cluster 47 Tucana is seen at the right.) Astronomers using the Gaia mission and the new H3 Survey of stars in the Milky Way's halo have shown that the Galaxy's last major merger was with a dwarf system known as Gaia-Sausage-Enceladus about 8-10 billion years ago, and about half of the stars in the galactic halo descend from that system.

One of the characteristic features of modern cosmology is its description of how galaxies evolve: via a hierarchical process of colliding and merging with other systems. Nowhere in the universe do we have a clearer view of this buildup than in our own Milky Way. Currently one of our nearby neighbors, the Sagittarius dwarf galaxy, is being tidally disrupted (a dwarf galaxy has less than about 1% of the stellar mass of a normal spiral galaxy like the Milky Way, and often much less). Two other nearby dwarfs, the Large and Small Magellanic Clouds (with about 1% and 0.7% of the stellar mass of the Milky Way, respectively) are falling towards us. Meanwhile streams of globular clusters encircle the Galaxy, marking the effects of prior mergers. The record of even more ancient mergers can be extracted from the positions and motions of stars in the Milky Way’s stellar halo, the roughly spherical distribution of stars (about one hundred thousand light-years in diameter) older than about 10-12 billion years. Meanwhile Andromeda, our nearest large neighboring galaxy, is about ten times farther away than these dwarfs; a merger with it is expected in another five billion years.

The Gaia spacecraft was launched in 2013 with the goal of making a precise three-dimensional map of the Milky Way by surveying 1% of its approximately 100 billion stars. CfA astronomers Rohan Naidu, Charlie Conroy, Ana Bonaca, Rainer Weinberger, Nelson Caldwell, Sandro Tacchella, Jiwon Han and Phillip Cargile and their team used Gaia results combined with a new survey of the outer reaches of our Galaxy with the 6.5m MMT telescope in AZ (the "H3 Survey") to piece together the history of the Milky Way’s stars in unprecedented detail in order to determine the nature of the Galaxy's last merger. The evidence was already convincing that a single dwarf galaxy merged with the Milky Way about 8-10 billion years ago. Known as Gaia-Sausage-Enceladus (GSE), what is left of the object today is inferred from the stars in the inner halo by their stellar motions and compositions. Still uncertain, however, was whether GSE collided with our galaxy head-on, or if instead it orbited the galaxy before gradually merging, and if so, what that orbit looked like.

The astronomers addressed these questions by modeling Gaia’s measured halo stars with a set of numerical simulations coupled with a comparison to the stellar ages and compositions. They show that GSE contained about half a billion stars, and did not orbit the Milky Way but approached it moving in a retrograde direction (that is, opposite to the Galaxy's rotational motion). They also conclude that roughly 50% of the Milky Way's current stellar halo and about 20% of its dark matter halo descend from it. The Milky Way contains stars that are about 13 billion years old, although these may have been captured by the Galaxy after it formed. With the completion of this study, however, almost the entire growth of the Milky Way over the past ten billion years can be accounted for.