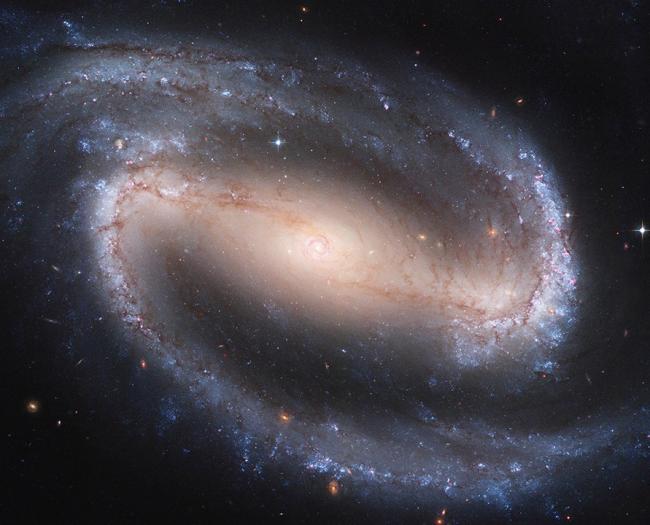 The barred spiral galaxy NGC1300 as seen by Hubble.  Astronomers think that galactic bars help funnel material into the nuclear regions of galaxies where they help trigger star formation and feed the supermassive black hole.  The nuclear region is heavily obscured in the optical, but infrared and submillimeter wavelengths can penetrate the dust.  Analyses of new infrared spectra of water vapor and other gases have now confirmed and quantified these processes in the barred spiral ESO320-G030.

Large amounts of gas are sometimes funneled to a galaxy's nuclear regions, with profound consequences. The gas triggers starburst activity and can also feed the supermassive black hole, converting it into an active galactic nucleus (AGN); indeed the supermassive black holes in AGN are thought to gain most of their mass in these accretion events. Eventually, outward pressure from supernovae, shocks, and/or AGN activity terminate the inflow. Galaxy mergers are thought to be one mechanism capable of triggering these massive inflows by disrupting the medium. A less dramatic cause may result from gas flows induced by a combination of galactic rotation and the gravitational instabilities generated by galactic bars, the elongated central structures (composed of stars) found in numerous spiral galaxies including the Milky Way.

What happens to infalling gas when it encounters a nuclear region is poorly understood because the very high obscuration around galactic nuclei makes optical observations challenging. Astronomers have therefore been relying on data from far-infrared and submillimeter wavelength observations which can penetrate the dust, although longer wavelength imaging typically lacks the high spatial resolution needed. Infrared spectroscopy has been one of the premier ways to overcome both difficulties because the radiation not only penetrates the dust, the strengths and shapes of spectral lines can be modeled to infer even small dimensions as well as temperatures, densities, and other characteristics of the emitting regions.

CfA astronomers Eduardo Gonzalez-Alfonso, Matt Ashby, and Howard Smith led a team that modeled infrared spectra of water vapor from the nuclear region of the ultraluminous galaxy ESO320-G030, about 160 million light-years away, a galaxy that emits about one hundred times as much energy as the Milky Way. The data were obtained with the Herschel Space Observatory and the ALMA submillimeter facility. This galaxy shows no signs of having been in a merger, nor does it show any signs of AGN activity, but it does have a clear and complex central bar structure and infalling gas that was previously discovered through infrared spectroscopy.

The astronomers observed and modeled twenty spectral features of water vapor, enough diagnostic lines to model the complexity of the emitting regions. The successful results required a three-component nuclear model: a warm envelope (about 50 kelvin) about 450 light-years in radius within which is a second component, a nuclear disk about 130 light-years in radius, and finally a much warmer compact core (100 kelvin) about 40 light-years in radius. These three components alone emit nearly 70% of the galaxy’s luminosity from a starburst that is making about 18 solar-masses of stars a year (the Milky Way averages about one per year). The mass inflow rate into the region is about the same as the star production – about 18 solar-masses per year. In addition to these conclusions about the nuclear region, the astronomers use their best-fit results to model successfully 17 other molecular species (besides water) seen in the far infrared spectra, including ionized molecules and carbon and nitrogen-bearing molecules. The combined results, in particular the extremely high abundance of ionized molecules, suggest the strong presence of enhanced ionizing cosmic rays and shed light on the chemistry of the complex nuclear zone.