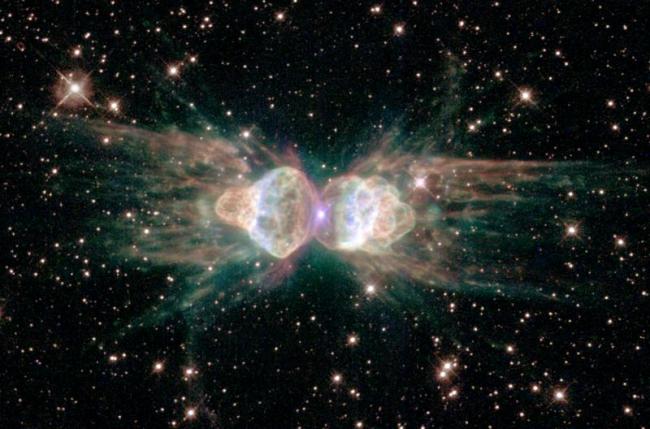 The Ant Nebula (Menzel 3) as seen by Hubble. Astronomers have detected hydrogen laser emission from this object – the first time lasers or masers have been convincingly seen in a planetary nebula.

Astronomical masers (the radio wavelength analogs of lasers) were first identified in space over fifty years ago and have since been seen in many locations; astronomical lasers have since been seen as well. Some of the most spectacular masers are found in regions of active star formation; in one case the region radiates as much energy in a single spectral line as does our Sun in its entire visible spectrum. Typically the maser radiation comes from molecules like water or OH that are excited by collisions and the radiation environment around young stars. In 1989, maser emission from atoms of atomic hydrogen gas was discovered around the star MWC349.

This remarkable source has since been found to emit lines at infrared wavelengths short enough to qualify them as being genuine lasers (not just masers). The object has been carefully modeled and the detailed conditions producing the lasers and masers have been determined: the lines arise predominantly in a dense disk of ionized gas seen nearly edge-on. Since the initial discovery, despite many searches, no other source has been found that is as complex and dramatic in its emission as is MWC349, although several other cases of weak hydrogen masers have been found.

CfA astronomer Rodolfo Montez was part of a group of fifteen astronomers using the Herschel Space Observatory to study planetary nebulae. They unexpectedly discovered twelve far infrared hydrogen laser lines in one of them, the nebula Menzel 3. Although weak compared to other atomic lines in the nebula, the hydrogen lines are much stronger than in any other known planetary nebula and stronger than was expected. Their relative strengths lines show that they cannot be coming from the normal ionized gas found in planetary nebulae, but rather from conditions that suggest high densities or some unusual effects. The line ratios are very similar to those in MWC349, leading to the conclusion that they are lasers. Since Menzel 3 (like MWC349) has a disk being viewed edge-on and a bipolar outflow, the physical conditions seem to support this conclusion. The new result adds one more natural laser to a short cosmic list, but also adds a mystery: the radio (maser) lines in hydrogen in MWC349 and other sources are very strong emitters, yet no masers have been seen in Menzel 3. There is clearly more to learn about about this object, and about astrophysical lasers.