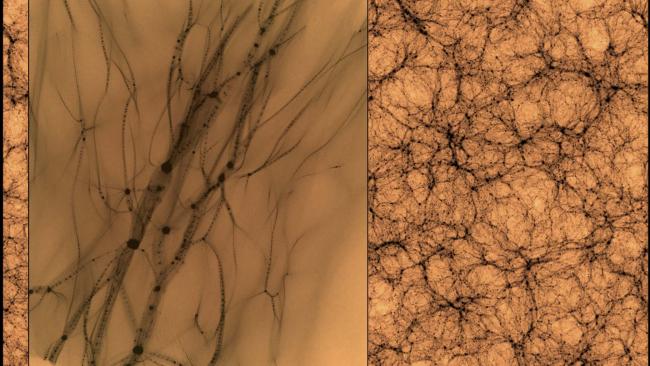 Cambridge, MA - Using the power of supercomputers, an international team of researchers has zoomed in on the smallest clumps of dark matter in a virtual universe. Published today in Nature, the study reveals dark matter haloes as active regions of the sky, teeming with not only galaxies, but also radiation-emitting collisions that could make it possible to find these haloes in the real sky.

Dark matter—which makes up roughly 83% of the matter in the universe—is an important player in cosmic evolution, including in the formation of galaxies, which grew as gas cooled and condensed at the center of enormous clumps of dark matter. Over time, haloes formed as some dark matter clumps pulled away from the expansion of the universe due to their own enormous gravity. The largest dark matter haloes contain huge galaxy clusters—collections of hundreds of galaxies—and while their properties can be inferred by studying those galaxies within them, the smallest dark matter haloes, which typically lack even a single star, have remained a mystery until now.

"Amongst the things we've learned from our simulations is that gravity leads to dark matter particles 'clumping in overly dense regions of the universe, settling into what's known as dark matter haloes. These can essentially be thought of as big wells of gravity filled with dark matter particles," said Sownak Bose, a postdoc at the Center for Astrophysics | Harvard & Smithsonian, and one of the lead authors on the research. “We think that every galaxy in the cosmos is surrounded by an extended distribution of dark matter, which outweighs the luminous material of the galaxy by between a factor of 10-100, depending on the type of galaxy. Because this dark matter surrounds every galaxy in all directions, we refer to it as a 'halo.'

Using a simulated universe, researchers were able to zoom in with the precision required to recognize a flea on the surface of the full Moon—with magnification up to 10 to the power of seven, or 10 followed by seven zeroes—and create highly detailed images of hundreds of virtual dark matter haloes, from the largest known to the smallest expected.

While studying the structure of the haloes, researchers were met with a surprise: all dark matter haloes, whether large or small, have very similar internal structures which are dense at the center and become increasingly diffuse moving outward. Without a scale-bar, it is almost impossible to tell the difference between the dark matter halo of a massive galaxy—up to 10^15 solar masses—and that of a halo with less than a solar mass—down to 10^-6 solar masses. "Several previous studies suggested that the density profiles for super-mini haloes would be quite different from their massive counterparts," said Jie Wang, astronomer at the National Astronomical Observatories (NAOC) in Beijing, and a lead author on the research. "Our simulations show that they look similar across a huge mass range of dark haloes and that is really surprising." Bose added that even in the smallest haloes which do not surround galaxies, "Our simulations enabled us to visualize the so-called 'cosmic web.' Where filaments of dark matter intersect, one sees the tiny, near spherical blobs of dark matter, which are the haloes themselves, and they are so universal in structure that I could show you a picture of a galaxy cluster with a million billion times the mass of the Sun, and an Earth-mass halo at a million times smaller than the Sun, and you would not be able to tell which is which."

Although the images of dark matter haloes from this study are the result of simulations, the simulations themselves are informed by real observational data. For astronomers, that means the study could be replicated against the real night sky given the right technology. “The initial conditions that went into our simulation are based on actual observational data from the cosmic microwave background radiation measurements of the Planck satellite, which tells us what the composition of the Universe is and how much dark matter to put in," said Bose.

During the study researchers tested a feature of dark matter haloes that may make them easier to find in the real night sky: particle collisions. Current theory suggests that dark matter particles that collide near the center of haloes may explode in a violent burst of high-energy gamma radiation, potentially making the dark matter haloes detectable by gamma-ray and other telescopes.

"Exactly how the radiation would be detected depends on the precise properties of the dark matter particle. In the case of weakly interacting massive particles (WIMPs), which are amongst the leading candidates in the standard cold dark matter picture, gamma radiation is typically produced in the GeV range. There have been claims of a galactic center excess of GeV-scale gamma radiation in Fermi data, which could be due to dark matter or perhaps due to pulsars," said Bose. "Ground-based telescopes like the Very Energetic Radiation Imaging Telescope Array System (VERITAS) can be used for this purpose, too. And, pointing telescopes at galaxies other than our own could also help, as this radiation should be produced in all dark matter haloes." Wang added, "With the knowledge from our simulation, we can evaluate many different tools to detect haloes—gamma-ray, gravitational lensing, dynamics. These methods are all promising in the work to shed light on the nature of dark matter particles."

The results of the study provide a pathway both for current and future researchers to better understand what’s out there, whether we can see it or not. “Understanding the nature of dark matter is one of the Holy Grails of cosmology. While we know that it dominates the gravity of the universe, we know very little about its fundamental properties: how heavy an individual particle is, what sorts of interactions, if any, it has with ordinary matter, etcetera,” said Bose. "Through computer simulations we have come to learn about its fundamental role in the formation of the structure in our universe. In particular, we have come to realize that without dark matter, our universe would look nothing like the way it does now. There would be no galaxies, no stars, no planets, and therefore, no life. This is because dark matter acts as the invisible skeletal structure that holds up the visible universe around us.">