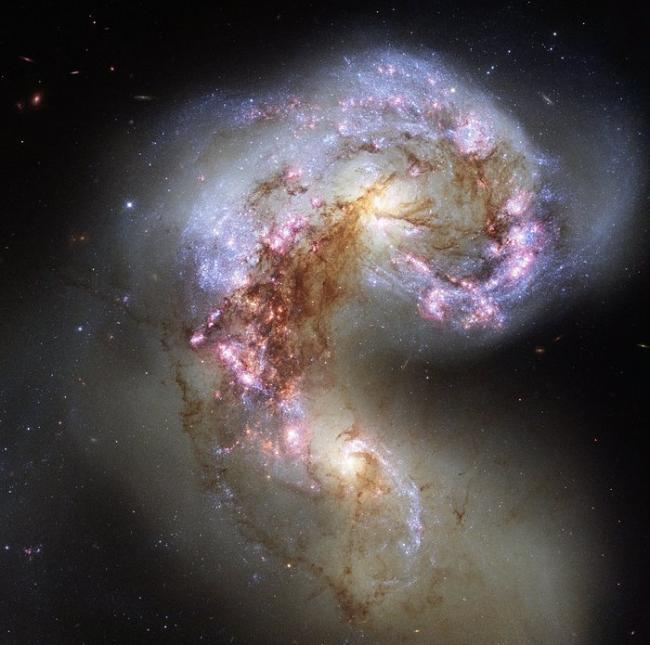 An image of the colliding galaxies known as The Antennae, taken in the optical and near-infrared. Astronomers using the ALMA submillimeter array have found evidence for shocked gas near the nucleus of the northern (upper) galaxy, and argue that it is due to material infalling onto the nuclear region.

Collisions between galaxies, especially ones rich in molecular gas, can trigger bursts of star formation that heat the dust and result in their shining brightly in the infrared. Astronomers think that there is also significant gas inflowing to the central regions of galaxies that can stimulate starburst activity. Inflowing gas, as it collides with the gas in the inner regions, should produce powerful shocks that should make the gas itself glow. Some evidence for gas inflows on galactic scales has been discovered, but there have been few observational confirmations of the effects of the inflowing material in the inner region of the galactic nucleus.

CfA astronomers Junko Ueda, David Wilner, and Giovanni Fazio used the ALMA submillimeter array to study the gas in the central regions of the Antennae galaxies, the nearest mid-stage merging system (about seventy-two million light-years away). The star formation rate of the system is estimated to be about ten solar-masses per year, much of it in the off-nuclear region (the so-called “overlap region”) of the two galaxies; the two nuclear regions themselves appear to have lower star formation rates.

The astronomers examined the star formation in one of the two nuclear regions, whose gas abundance is as much as one hundred times more than in the Milky Way’s center. They measured the emission from five organic molecules, CN, HCN, HCO+, CH3OH (methanol), and HNCO (isocyanic acid), looking for evidence of shock activity. And they found it. The methanol and isocyanic acid in particular were detected, for the first time in this object, and show clear evidence ion their intensities, ratios, and velocities for being excited by shocks. The evidence from the geometry of the emission suggests that the shocks are produced by infall, rather than from the collision. However, there is also the possibility that the induced burst of star formation produced local shocks that contributed to the shock activity. Although further work is needed, the results so far indicate that infalling material is likely responsible.