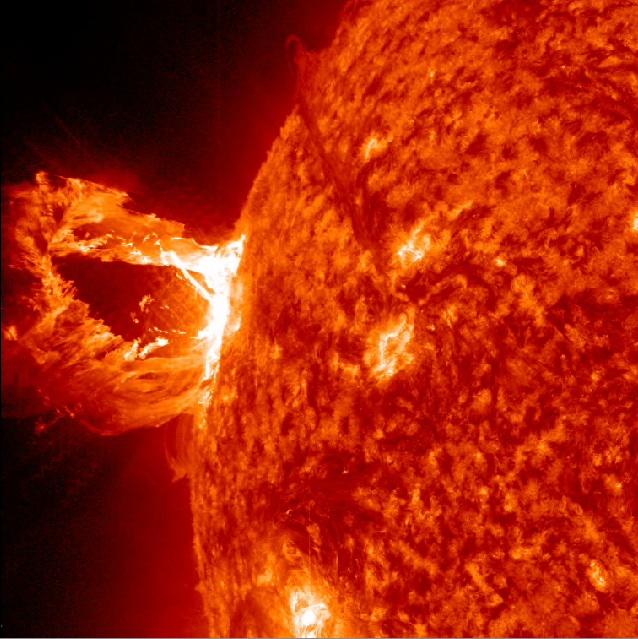 A close-up of an eruption at the edge of the sun taken by the AIA 304 Angstrom channel, which images plasma of about 50,000 degrees Kelvin. After the eruption, bright material can be seen streaming back down to the Sun's surface.

A spectacular eruption at the edge of the solar disk was captured by the Atmospheric Imaging Assembly (AIA) instrument aboard NASA’s Solar Dynamics Observatory (SDO) on April 16, 2012.

An eruption like this can send over 10 billion tons of material into space, approximately the mass of one hundred thousand air craft carriers! This material can interact with the Earth's magnetic field, causing the aurorae, and it can also affect satellites and communications with airplanes flying over the poles. Luckily, this eruption was not aimed at Earth, so there's nothing to worry about for now. But the solar cycle is on the upswing, so many more events are expected in the near future!

The 304 A image shows plasma at about 50,000 K, and the 193 MK image shows hotter plasma, at about 1.5 MK. After the eruption, large amounts of cool plasma can be seen in the 304 channel falling back down to the sun under the force of gravity. The curved trajectories of this plasma give an indication of the location of the magnetic field lines near the Sun's surface.

AIA was developed with the help of scientists and engineers from the Harvard-Smithsonian Center for Astrophysics in concert with the lead institution, the Lockheed Martin Solar and Astrophysics Laboratory.