The Stratosphere of a Hot Exoplanet 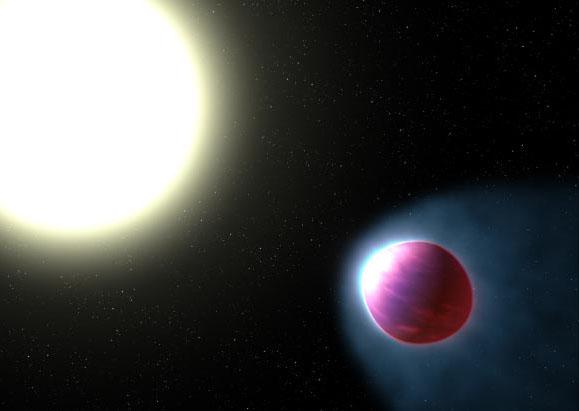 An artist's conception of the hot-Jupiter exoplanet WASP-121b with its star. Astronomers have discovered in this object the first unambiguous signs of a hot stratosphere, heated to a blazing 2400 Celsius.

The stratosphere of a planetary atmosphere is the layer in which the temperatures rise with altitude, in contrast to the tropospheric layer (near the ground) in which the temperature falls with altitude. On the Earth the stratosphere begins at thirty to sixty thousand feet, depending on the latitude; it terminates at about 160,000 feet. The temperature inversion of the Earth's stratosphere is caused principally by ozone, which exists at these higher altitudes and absorbs sunlight to heat the layer. A planet's stratosphere thus contains information about its chemical composition, and astronomers probing the atmospheres of exoplanets have wondered whether any of them show signs of having a stratosphere. The molecules in this warm gas layer should emit diagnostic spectral lines that could be spotted from Earth.

CfA astronomer Mercedes Lopez-Morales was the Co-Principal Investigator in a large team of international exoplanet hunters who discovered a stratosphere on the exoplanet WASP-121b, the first unambiguous such discovery. The exoplanet itself, discovered in 2015, is a so-called hot-Jupiter, and orbits its star every 1.27 days. Its mass is slightly larger than Jupiter’s, and it orbits so close to its star that its atmospheric temperature is thought to be heated to about 2200 Celsius (hence the name, "hot Jupiter").

The astronomers used the Hubble Space Telescope and the IRAC camera on the Spitzer Space Telescope to study in the planet during its secondary eclipses: as it passed behind the star, its illuminated Earth-facing side can be seen. The reflected light from the atmosphere enabled scientists to spot faint emission lines of the molecules present, including in this case water molecules at a temperature of about 2400 Celsius, as well as some other species that are still uncertain. The hot gas is consistent with the presence of a stratospheric layer on the planet. Water had been previously spotted on WASP-121b during a normal transit, but this new result shows that there is water in the stratosphere. The models were able to infer even more detailed information about the atmosphere, for example, that the molecules in that layer absorb about twenty percent of the incident stellar radiation, contributing to the stratosphere being hotter than the general atmosphere.