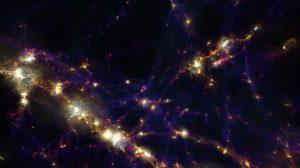 A screenshot picture of galaxy formation produced by the IllustrisTNG simulation, which provides new insights into the formation and evolution of galaxies and, in particular the way accretion onto their nuclear supermassive black holes provides feedback to the galaxy.

The nuclei of most galaxies host supermassive black holes with millions or even billions of solar-masses of material. Material in the vicinity of such black holes can accrete onto a torus of dust and gas around the black hole, and when that happens the nuclei become active and radiate powerfully across the full spectrum. Active galactic nuclei (AGN) are among the most dramatic and interesting phenomena in extragalactic astronomy. Exactly what turns the accretion on or off is not understood, nor is how the associated processes produce the emission, generate jets of particles, or influence star formation in the galaxy.

CfA astronomer Lars Hernquist joined with his colleagues to develop improved computer simulations of galaxy formation that take into account two different pathways by which the supermassive black hole can accrete material and provide feedback to the galaxy. The simulations, based on the previous Illustris code, are called Illustris TNG (The Next Generation). The two ways are distinguished by two different rates of mass accretion, with the comparatively more efficient process occurring as material rapidly accretes onto the black hole and the alternative, slower rate process providing feedback more weakly to the surroundings in an intermittent fashion. The choice of a mass-dependent switch between the two modes of AGN feedback is one of the strengths of this new code and was motivated by observations of galaxy behaviors.

The IllustrisTNG results are able to reproduce a wide range of AGN observations and arguable provide the best current models for galaxy formation. They show that at early epochs in cosmic history feedback from star formation dominated galaxy development, but in more recent times (but depending on the galaxy’s mass) the first mode of strong accretion onto the AGN dominates. The authors conclude from the simulations however that, although a significant amount of energy is injected by the AGN into the galaxy, usually only a small fraction of it actually acts on the galaxy - most material cools off quickly and loses its effectiveness.