The space between galaxies is emptier than the best vacuum we can make in the lab. However, when viewed from a grand astronomical perspective, the small amount of matter adds up to make the “intergalactic medium”. This tenuous gas is extremely hot, and contains matter swept out of galaxies by star formation, black holes, interactions between galaxies, and possibly other phenomena which we have yet to discover.

Most of the matter in the universe is dark matter, the mysterious invisible substance that holds galaxies together by its gravity. Ordinary matter, which is all the atoms making up everything directly visible to us, is only about five percent of the total contents of the universe. However, astronomers still can’t pin down the positions of all of those atoms.

That’s because they’re in between galaxies, which is most of the empty space in the universe. The average density of the intergalactic medium (IGM) is about one atom per cubic meter: less than a billionth of a billionth of the density of air on Earth.

Despite that, astronomers have measured some properties of the IGM, enough to learn that its temperature is millions of degrees. Gas this hot produces X-rays, which is how astronomers know the IGM is even there. Studying the spectrum of X-ray emission, researchers learned the chemical composition of the material. That chemistry reflects the two sources of the IGM: primordial hydrogen and helium, left over from the formation of the first galaxies, and heavier atoms blown out of galaxies at later times. According to theoretical calculations, the IGM contains roughly half the atoms in the universe, with the other half being in galaxies, including their stars, planets, and interstellar gas.

Studies of the IGM are closely related to studies of galaxy formation and “winds”: material blown out of galaxies. These winds are produced by star formation, where the collapse of material to make new stars blows excess gas away at high speeds. Another major source of wind is the supermassive black holes at the centers of galaxies, which draw gas in and heat it up, then blast much of it back out into space in the form of jets.

Despite observing these winds in galaxies, the low density of the IGM makes it difficult to determine where all those atoms end up. Researchers look for the X-ray signatures produced by the hot gas, which is an exercise in patient and careful observation. 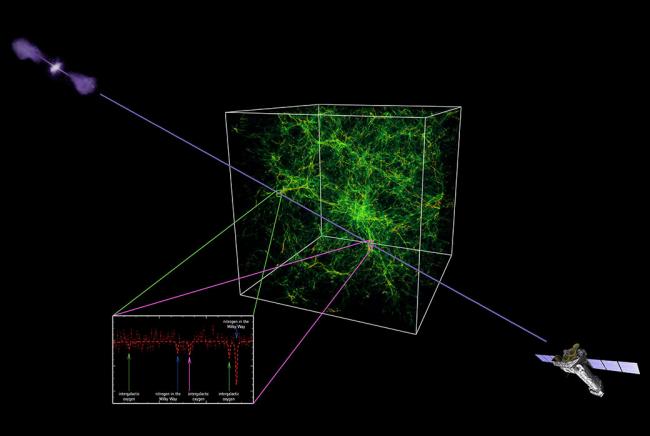 According to theory, much of the ordinary matter in the universe lies between galaxies in the form of the warm-hot intergalactic medium (WHIM). This image depicts a simulation of the WHIM structure, which has been observed by the XMM-Newton X-ray observatory.