Star formation is a complex process, beginning from cold clouds of gas and dust and ending with the diverse population of stars we observe in our galaxy and beyond. Studying that process requires many different types of astronomical observations to capture the composition, dynamics, and other properties of star-forming regions. While most researchers focus on certain aspects of these systems, the COordinated Molecular Probe Line Extinction Thermal Emission (COMPLETE) Survey of Star Forming Regions was an ambitious project designed to capture as much information as possible, using data from multiple observatories to accomplish the task. During the survey’s data-collecting period, each of these observatories provided a different type of observation on three star-forming regions in the Milky Way, across the infrared, microwave, and radio part of the spectrum of light. COMPLETE was a collaboration between astronomers at the Center for Astrophysics | Harvard & Smithsonian and other universities around the world. 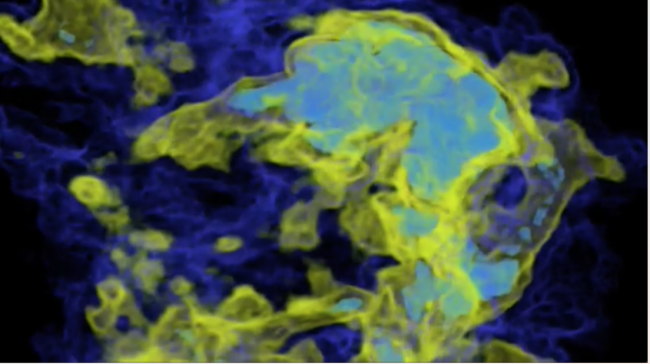 Stars are hot and bright, but they are born from cold, dense, opaque nebulas known as molecular clouds. If something disturbs these clouds, they collapse and heat under the force of gravity, eventually igniting nuclear fusion and becoming a new star. That’s the big picture, but if we want to understand the diverse range of stars we see in the universe, we need to fill in the details.

That’s where COMPLETE comes in. While many astronomical observations focus on the molecules inside star-forming regions, the motion of the gas inside the clouds, or other information COMPLETE was designed to collect and combine all of that data, generating a fuller picture of star formation. Molecular clouds are opaque in optical wavelengths, requiring the use of radio and infrared observatories to see inside. COMPLETE combined data from infrared telescopes such as NASA’s Spitzer Infrared Space Telescope, radio telescopes like the National Radio Astronomy Observatory’s Green Bank Telescope (GBT), and microwave telescopes including the Caltech Submillimeter Observatory (CSO). COMPLETE also used data from the 2 Micron All-Sky Survey (2MASS), a survey of the entire sky in infrared light conducted at the CfA’s Fred Lawrence Whipple Observatory (FLWO) in Arizona and the Cerro Tololo Inter-American Observatory in Chile.

The COMPLETE survey collected data on three star forming regions in the constellations of Perseus, Ophiuchus, and Serpens, which were also observed during the Spitzer Legacy Program "From Molecular Cores to Planet Forming Disks" (c2d). The many different observatories obtained maps of the distribution of hydrogen atoms, carbon monoxide and other small molecules, and larger dust particles, as well as tracing the motion of material within molecular clouds. All of this data is available on the COMPLETE website, along with software tools for analyzing it. The observational phase of COMPLETE is finished, but astronomers continue to extract new results from its data.

COMPLETE is led by Professor Alyssa Goodman of CfA, and involves astronomers located across the United States, Canada, and Europe.