The night may make a dome over our heads, but it’s still basically two dimensional. To put it another way: we can’t tell how far stars are away from us just by looking at them. The apparent brightness of a star isn’t enough by itself to measure its distance. When trying to find how far distant galaxies are, the problem is even bigger.

To solve the difficulty, astronomers have developed a number of methods for measuring extragalactic distances. Those include finding objects or events with known brightness, looking for the distinctive light from certain types of atoms, and even mapping the locations of millions of galaxies to measure waves in space that existed before any star was born. 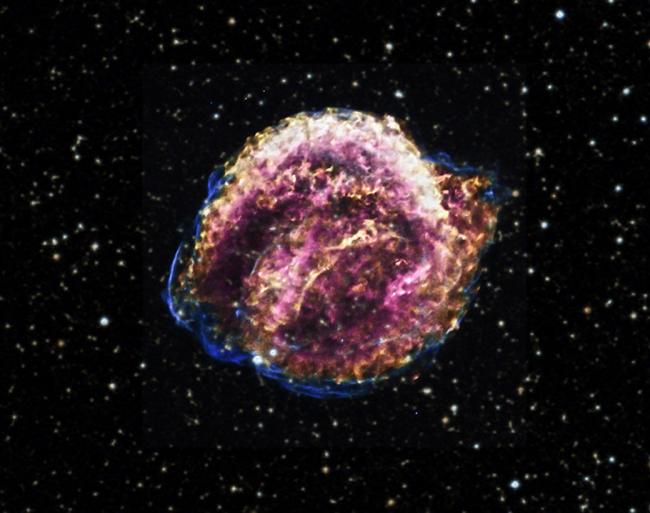 An optical and X-ray image of Kepler's supernova, a type Ia supernova described by Johannes Kepler in 1604. Type Ia supernovas are the explosions of white dwarfs, which astronomers use to measure extragalactic distances and the expansion rate of the universe.

How I Wonder Where You Are

It’s easier to measure distances to nearby stars than far-off galaxies. That’s an obvious statement, but it contains something helpful: if we can reliably find how far nearby objects are, we can use those distances to calibrate measurements to things a little farther away, and so on. This method of successive measurement is called “bootstrapping”.

For relatively close stars, astronomers measure distances using parallax, using the orbit of Earth around the Sun. Over the course of six months, Earth moves about 300 million kilometers, or 186 million miles. That difference in vantage point makes nearby stars appear to be in different places in the sky, which can be used to calculate those stars’ distances geometrically.

The parallax effect is small for far-off objects, so it’s no good for measuring extragalactic distances. However, astronomers have identified certain objects which emit light in predictable ways. If we know how bright something is intrinsically, we can calculate its distance.

The expansion of the universe also provides some help, by stretching the wavelength of light to a larger degree depending on how far the object is away. That changes the color of that light in a predictable way, known as redshift, since red light has longer wavelength than blue light. Astronomers look for the spectrum of certain atoms shifted to different colors, which lets them measure the distance from the redshift.

Using these known quantities, astronomers have a set of reliable objects to use for measuring extragalactic distances. These include:

Theoretical Astrophysics, Institute for Theory and Computation
AbacusSummit is the world’s largest suite of high-performance cosmological N-body simulations, developed to meet and exceed the analysis requirements of the Dark Energy Spectroscopic Instrument. These simulations allow one to predict the large-scale structure that results from a wide range of cosmological models, enabling detailed investigations of theories of cosmological structure formation and comparison to the coming decade of observational surveys.
2

Optical and Infrared Astronomy
The Dark Energy Spectroscopic Instrument (DESI) consortium is conducting a five-year survey to map the large-scale structure of the Universe over one-third of the sky and 11 billion years of cosmic history, aiming to study the physics of dark energy.
3