Large galaxies like the Milky Way formed out of mergers with smaller galaxies and by stealing some of their stars. Astronomers discovered that as many as 25% of galaxies are currently merging with others. Probably even more are gravitationally interacting with their neighbors, with subsequent exchanges of stars and effects on the structures of both galaxies. For that reason, researchers study merging and interacting galaxies to understand how they form and evolve. 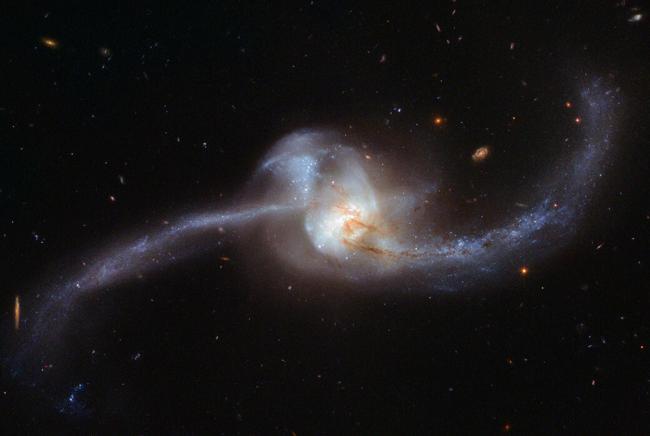 This image from NASA's Hubble Space Telescope shows the merging galaxies NGC 2623. The individual galaxies are being pulled apart, and the process is leading to the birth of new stars, seen here in bright blue.

What Galaxy Mergers Do

Billions of years from now, our galaxy will collide and merge with the Andromeda Galaxy, eventually forming one big galaxy. The Milky Way itself is the product of past mergers, which we see from traces of those other galaxies. And our galaxy currently is interacting gravitationally with its satellites, exchanging stars in long streams.

Astronomers see galaxy interaction and merging throughout the universe. In particular, large galaxies formed by merging with smaller galaxies over billions of years. The largest galaxies in the cosmos, the giant ellipticals, almost certainly got that way by mergers. Irregular galaxies, including our neighbors Large and Small Magellanic Clouds, probably got their distorted shapes through gravitational interactions with other galaxies. Since ellipticals make up about 15% of known galaxies and irregulars are an additional 5%, mergers and interactions play an obvious role in the types of galaxies we see.

In addition, astronomers observe galaxies that are currently merging, which is somewhere between 5% and 25% of all galaxies. In many of these cases, the galaxies undergo an intense burst of star formation, strongly implying a connection between galactic interactions and the birth of stars.

Galaxy mergers can be spectacularly beautiful, as in the case of the Antennae Galaxies. First observed in 1785, these were originally two similarly-sized spiral galaxies that began colliding around 600 million years ago. Their original spiral shapes are mostly gone, but the merger has created huge amounts of star formation. Eventually, these galaxies will form one large galaxy.

Other galaxy mergers are more lopsided. The Milky Way is currently engaged in “galactic cannibalism”, stripping stars off our satellite galaxies. Based on studies of populations of stars, astronomers have found this isn’t the only time such cannibalism has happened.

Between larger galaxies eating smaller ones and mergers between roughly equal-sized galaxies, interactions play an obviously important part in the growth and evolution of galaxies.