Everywhere we point telescopes in the sky, we see galaxies, going back to the earliest moments in history where galaxies could even exist. These galaxies fall into a pattern: the large-scale structure of the universe. This structure is a huge web shaped by gravity, with most galaxies and galaxy clusters lying along the strands.

On even grander scales, what became galaxies and clusters began as froth on huge cosmic sound waves during the era when the universe was a hot cauldron of particles and light. These waves are called “baryon acoustic oscillations”, and they provide us with a way to measure the expansion rate of the universe, including the mysterious acceleration caused by dark energy.

Center for Astrophysics | Harvard & Smithsonian scientists lead many studies of the large-scale structure of the universe and baryon acoustic oscillations. Two examples include:

The Large-Scale Structure of the Universe

A completely homogeneous universe would have no stars, galaxies, or planets. As it turns out, when it began, our universe was almost completely homogeneous, with the seeds for everything we see in the sky likely came from disturbances from a tiny fraction of a second after the Big Bang. These were subatomic fluctuations in the density of the primordial soup of quantum particles, but stretched out as the universe expanded until they were bigger than any galaxy. Where the density of particles was higher, gravity attracted yet more particles, especially dark matter. The dark matter in turn attracted ordinary matter, and galaxies and galaxy clusters grew where enough material collected.

The result is the large-scale structure of the universe: a map of those primordial fluctuations. What we see today is long strands, sheets, and clusters of galaxies forming a huge web. The web is punctuated by voids, which have few or no galaxies. Center for Astrophysics | Harvard & Smithsonian scientists Margaret Geller, John Huchra, and colleagues discovered the first huge piece of this structure in 1989, which is known as the “Great Wall”.

Mapping the large-scale structure provides us with information about fluctuations in the very early universe, as well as the distribution of dark matter, the formation of galaxies, and a measure of how quickly the universe is expanding. 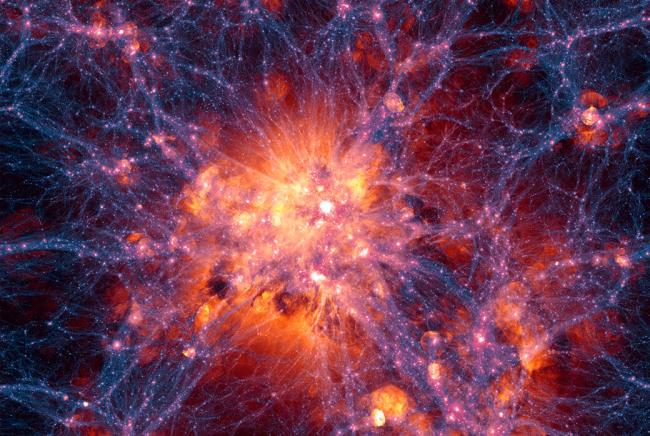 A computer model of the large-scale structure of the universe using the Illustris simulator. This image depicts the dark matter and gas involved in forming galaxies and galaxy clusters, as well as the filaments connecting them.

Before the universe was about 380,000 years old, all of the ordinary matter took the form of a hot, opaque plasma. Sound waves, which are just patterns of compression and decompression in matter, flowed through this plasma in all directions. When the universe cooled and became transparent, creating the cosmic microwave background, traces of those sound waves were left in the distribution of ordinary matter particles, which astronomers call “baryons”.

The relic sound waves are known as baryon acoustic oscillations (BAO). Unlike large-scale structure, they’re too big to be governed by dark matter or gravity. For that reason, the crests and troughs of BAO are very regular, with a scale of roughly 500 million light-years — more than ten times the size of a large galaxy cluster. Astronomers use BAO as a “standard ruler” to measure distances on cosmic scales. BAO is also one of the major ways astronomers study dark energy, the accelerated expansion of the universe.