The Cosmic Evolution of Galaxies 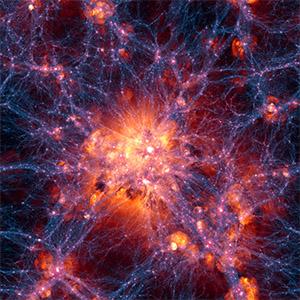 A snapshot from the Illustris Project computer simulation of cosmic structure formation. This artificially colored image shows filaments and galaxies in the web of cosmic matter, as seen today over a field-of-view about fifty million light-years across. A new paper examines the changing frequency of galaxy collisions, as computed by in Illustris, as the universe evolves from the big bang to the present day.

Our knowledge of the big bang has increased dramatically in the past decade, as satellites and ground-based studies of the cosmic microwave background have refined parameters associated with the very early universe, achieving amazing precisions (though not necessarily accuracies) of a few percent. Unfortunately, our knowledge of what happened after that - from those first few hundred thousand years until today, 13.7 billion years later - is very much a work-in-progress. We know that galaxies and their stars formed out of the cooling, filamentary network of matter from that early era. They re-ionized the hydrogen gas, and then continued to evolve, and collide with one another as the universe steadily expanded. Distant galaxies are faint and hard to detect, however, and although observations have made excellent progress in piecing together the story line, astronomers have turned to theory and computer simulations to try to complete the picture.

There are three main theoretical approaches to study the cosmic frequency of galaxy mergers, which differ in how they model galaxies. The first approach does not attempt to model galaxy formation from first principles, and instead "paints" galaxies onto the dark matter environment (they are called "halos") according to constraints set by observations. The second approach models galaxy formation by means of simple mathematical recipes, again using dark matter halos as the backbone of the model. The third method, hydrodynamic simulations, attempts to model everything (dark matter, gas and stars) self-consistently, a task that until recently had been computationally too difficult.

CfA astronomers Vicente Rodriguez-Gomez, Shy Genel, Annalisa Pillepich, Dylan Nelson, and Lars Hernquist and their colleagues have developed a new theoretical framework for calculating the frequency of galaxy mergers in the Illustris Project, a cosmological hydrodynamic simulation which models the formation of galaxies in cosmic volumes about three hundred million light-years in size,

huge enough to replicate many known properties of galaxies and clusters both locally and at earlier epochs. The large volume, the self-consistent treatment of normal matter, and the realistic galaxy formation model used, allows the Illustris simulation to provide an unprecedented and precise study of mergers over cosmic time.

The astronomers find clear evidence for steadily decreasing galaxy merger rates (the merger frequency three billion years after the big bang was about fifteen times higher than it is today), and they clarify the nature of mergers, for example, finding the most useful definition for the mass ratio of the merging galaxies and constraining the epoch of mass infall during a collision. They report some sharp differences between their results and those predicted by some other popular theories, as well as some ambiguities in the (still imprecise) observed datasets. Their important research marks the start of a more detailed series of investigations into the cosmic evolution of galaxies.