The Center for Astrophysics | Harvard & Smithsonian headquarters in Cambridge, Massachusetts is home to more than 600 astronomers, engineers and support staff who together make up one of the largest organizations dedicated to the study of the Universe in the world. The Cambridge facilities, spanning four buildings, include the John G. Wolbach Library; the Millimeter Wave Telescope (MWT); laboratories for atomic and molecular experiments; computing centers, and engineering facilities.

The CfA | Harvard & Smithsonian was created in 1973 to combine the Harvard College Observatory (HCO) and the Smithsonian Astrophysical Observatory (SAO) under a single umbrella and director. Since then, the headquarters has grown beyond its original building to fill three additional sites in Cambridge, to house the scientists, engineers, and other staff supporting the study of the Universe and its contents. 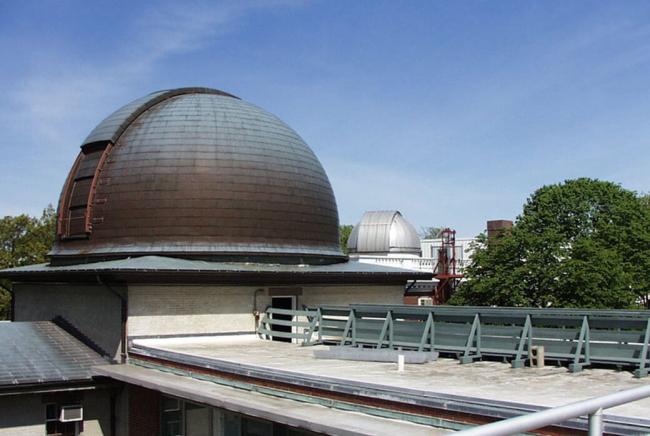 The domes for the 15-inch Great Refractor Telescope and the 1.2-meter-diameter Millimeter Wave Telescope are the most prominent features of the roof of the Center for Astrophysics | Harvard & Smithsonian in Cambridge, Massachusetts.