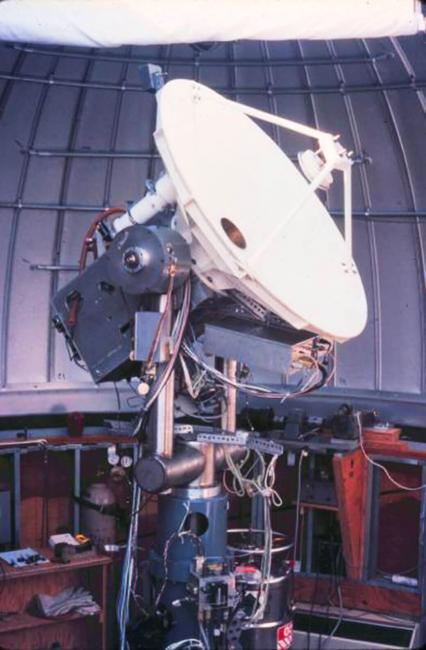 The 1.2 Meter Millimeter-Wave Telescope in on the roof of the Center for Astrophysics Headquarters in Cambridge, Massachusetts. CfA researchers use it to map the structure of the Milky Way.

The MWT was built at Columbia University in New York City in 1974, not long after the first measurements of interstellar molecules were made. The telescope was moved to the rooftop of the CfA Headquarters in Cambridge, Massachusetts in 1986, where it has operated ever since. The twin instrument was built at Columbia in 1982 and relocated to Chile, providing data on the sky visible from the southern hemisphere.

Millimeter-wave light lies at the border between infrared and radio light on the spectrum. This is a useful type of light for observing emissions from molecules such as carbon monoxide, which are relatively common in the interstellar nebulas known as molecular clouds. These nebulas are nurseries for star formation, but they are also tracers of the structure of the Milky Way: they are denser in the spiral arms than elsewhere, providing a way to map the galaxy from inside it.

The MWT and its Chilean twin have provided such a map, including the discovery that the Scutum-Centaurus spiral arm of the Milky Way extends a greater distance on the far side of the galaxy than previously expected. MWT results also demonstrated the existence of other spiral structures, and provided complementary observations of the galaxy for other observatories, including the Planck cosmic microwave background observatory and the Fermi Gamma Ray Observatory.