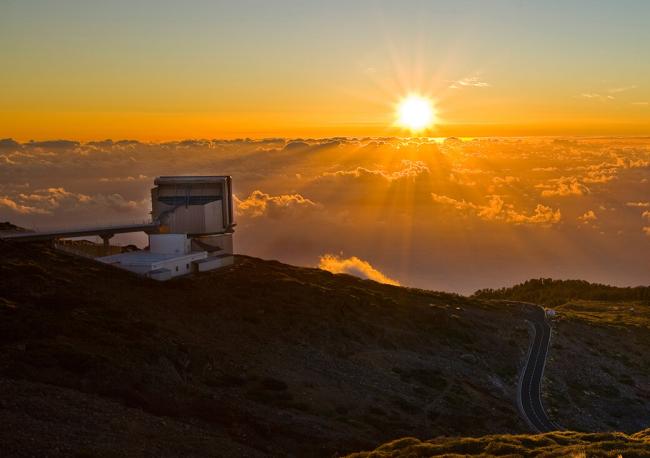 The Telescopio Nazionale Galileo on La Palma in the Canary Islands at sunset. The High Accuracy Radial velocity Planet Searcher for the Northern hemisphere (HARPS-N) is an instrument on this telescope, designed to find planets orbiting other stars.

Astronomers use two complementary methods to discover and characterize exoplanets. The transit method, used by NASA’s Kepler/K2 and TESS spacecraft, provides an estimate of the diameter of the planet. The radial velocity measurements performed by HARPS-N yield the planet’s mass. When both measurements are possible, they reveal the density of the exoplanet, which tells us if the planet is rocky like Earth or gaseous like Neptune.

HARPS-N is a visible-light spectrograph: an instrument designed to measure the spectrum of light from a star to high precision, including the Doppler shift from orbiting exoplanets. As a planet orbits, it tugs the star very slightly. That produces a Doppler shift in the wavelengths of the light emitted by the star, precisely how the sound from a siren on a moving vehicle changes with its speed and direction relative to the listener. For bright stars, HARPS-N can measure the speed of the star’s wobble down to 40 centimeters per second (0.9 miles per hour), which is slower than an average person’s walking speed.

In its first five years of operation from 2012 through 2017, HARPS-N measured the masses of 14 “super-Earth” and “mini-Neptune” exoplanets, which represents about half of the known smaller exoplanets. The goals for the second five years of observation include classifying small rocky exoplanets and identifying an Earth-mass planet in orbit around a Sun-like star.

The HARPS-N spectrograph is a primary instrument on the Telescopio Nazionale Galileo, an Italian-operated 3.58-meter (12-foot) telescope in the Canary Islands off the northwest coast of Africa. This location allows the telescope to view the same part of the sky where Kepler pointed during its primary mission, as well as a significant part of TESS’s observation range. A similar instrument, HARPS, is used on the 3.6-meter European Southern Observatory (ESO) telescope in Chile.

HARPS-N is operated by an international collaboration led by Geneva University, with substantial support from the CfA | Harvard & Smithsonian, the Universities of St. Andrews and Edinburgh in Scotland, the Queens University of Belfast in Northern Ireland, and the Telescopio Nazionale Galileo-INAF Observatory of Italy.