The stars we see in the sky aren’t as constant as they seem. When observed over a period of days or years, the amount of light we see from some stars can change. Sometimes that means the star is old and is actually pulsating in and out, with subsequent changes in its light output. Other times, the variation comes because the star is in a binary system, and the changes come as the star and its companion move back and forth. Variable stars and binaries are both important in stellar evolution, as well as providing ways of measuring cosmic distances. 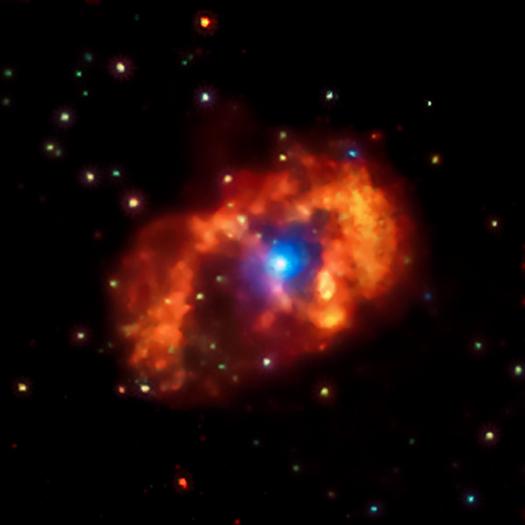 Seen in this image from NASA's Chandra X-ray Observatory, Eta Carinae is a system consisting of two extremely massive stars. Interactions between the stars produced an outburst that temporarily made Eta Carinae into one of the brightest objects in the sky in the 19th century.

In the constellation of Cetus the Whale, one star seems to disappear on a regular basis, then reappear. This star, named Mira — meaning “wonderful” in Latin — was the first variable star to be recognized as such. Mira changes in size dramatically over the course of 332 days. At its largest, it’s bright enough to be seen without a telescope, but as it shrinks, its light dims to invisibility.

Mira is one of the most dramatic variable stars, but it’s hardly alone in changing size and light output. When stars reach the final stages of life, they swell to giant size. That larger size coupled with the same mass means the gravity at the star’s surface is much less. Meanwhile, the energy output from fusion in the core pushes material outward. The balance between these influences shifts, pushing the star’s surface outward and pulling it back. In some cases the entire star changes in size, while in others a part of the star may grow while another part contracts, with the star alternating which part does which. In all these cases, the light from the star changes with the pulsations.

For some stars, known as Cepheid variables, variations are very regular in period and in the amount of light they produce: the longer the period of pulsation, the brighter the star. This “period-luminosity relation” was first identified by Harvard College astronomer Henrietta Swan Leavitt in the early 1900s. Knowing a Cepheid’s period of variability allows astronomers infer its distance, so astronomers ever since have used this information to measure distances within the Milky Way and to nearby galaxies.

Other variable stars are less predictable, erupting in giant stellar storms. Unlike pulsating stars, many of these eruptive variables are young, and their energetic outbursts come because they are still collecting matter onto themselves. Older stars may erupt for similar reasons to pulsations: gravity is no longer strong enough to hold all of the star’s material in against the outward flow of energy, leading to huge outbursts of matter.

Dance of the Demon

Like Mira, the fluctuating star Algol — meaning “demon” in Arabic — was first identified in antiquity. However, Algol’s brightness doesn’t change as dramatically, and the reason for the variation is very different: Algol is actually two stars in mutual orbit. The periodic dimming comes when one star eclipses the other.

Many stars are in binary or multiple systems: two or more stars in mutual orbit. Like Algol, a lot of these systems are too close together to be distinguished as multiple stars even with a telescope. However, their orbits can often be measured through the Doppler effect: the shifts in the color of light created as they move toward and away from us. That information gives us the masses of the stars in the system, information that’s difficult to obtain for isolated stars.

The life of a single star is dictated by its mass, but in a binary, the stars can influence each other’s evolution strongly. If they are close together, the gravitational tidal force can change each star’s shape and size. Stars in binaries can exchange matter with each other, and alter each other’s spin. That can have a profound effect on the life cycle of the individual stars in the binary, compared with stars existing in isolation.

The MicroObservatory Robotic Telescope Network is a collection of five computer-controlled telescopes, built specifically for use by public audiences of all ages. These telescopes were designed by the scientists and educators at the Center for Astrophysics | Harvard & Smithsonian, to allow non-professionals interested in astronomy to use small but high-quality instruments for observing the sky. The MicroObservatory telescopes are located at various CfA observatories, including the Fred Lawrence Whipple Observatory in southern Arizona.