As planets orbit, their gravity pulls their host star slightly. If the planet is massive or its orbit is small — or both — the wobble of the star can be measured by the Doppler shift in its light, akin to the change of sound pitch from a fast-moving ambulance. MINERVA’s telescopes measure this Doppler shift for Earth-mass planets orbiting very close to Sun-like stars, as well as for the large rocky worlds known as super-Earths orbiting farther out. These larger planets orbit in the habitable zone of their host star, which is the range of orbits where liquid water could exist.

Very little is known about super-Earths so far, including whether they might be habitable. Similarly, relatively few Earth-sized worlds have been observed, and current estimates of how many exist are largely based on extrapolation from observations of multiple-planet systems. MINERVA’s design helps it fill in some of those missing details.

MINERVA is located on Mt. Hopkins in southern Arizona, and began operations in 2015. The observatory consists of four 70-centimeter (28-inch) telescopes which can be used independently, or all pointed together at a single target to increase precision. These telescopes are directed at bright nearby Sun-like stars, and astronomers use them to learn how many of these types of worlds there might be.

In addition to Doppler measurements, MINERVA can also detect exoplanet transits: the small dip in the star’s light when the planet eclipses it. Together, these measurements reveal the size and mass of an exoplanet, which in turn tells us something about its composition. To perform these tasks, MINERVA has photometers to measure light levels and spectrographs to measure the way the colors of light shift via the Doppler effect. 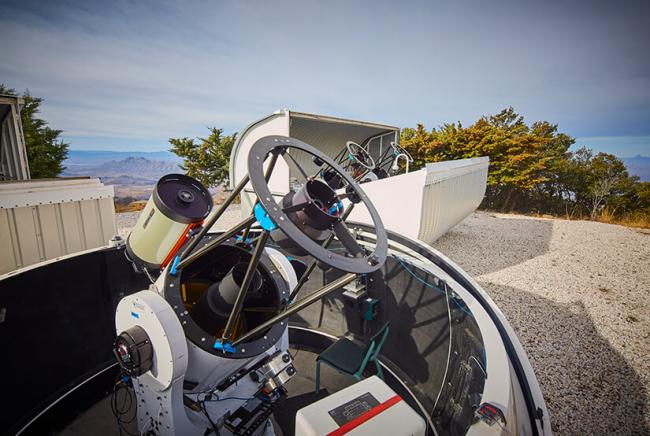 The MINERVA telescopes at the Fred Lawrence Whipple Observatory in Arizona.