Stars are the source of almost all of the light our eyes see in the sky. Nuclear fusion is what makes a star what it is: the creation of new atomic nuclei within the star’s core. Many of stars’ properties — how long they live, what color they appear, how they die — are largely determined by how massive they are. The study of stellar structure and evolution is dedicated to understanding how stars change over their lifetimes, including the processes that shape them on the inside. 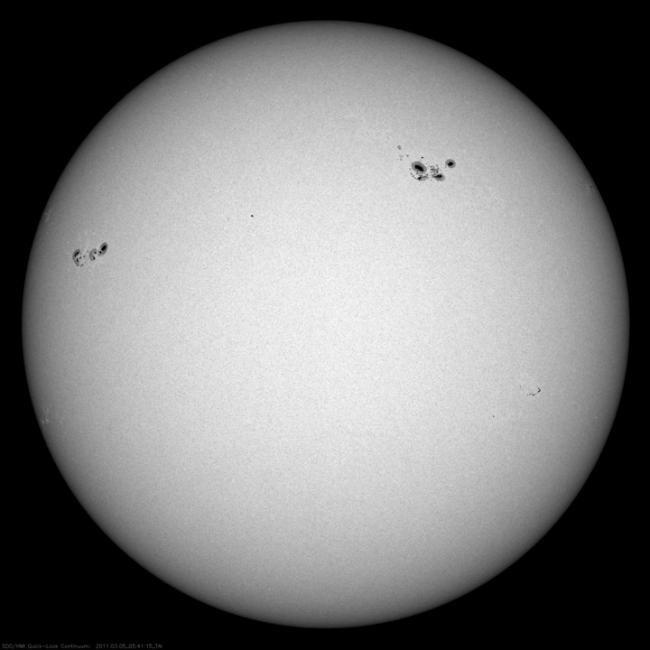 This NASA's Solar Dynamics Observatory image reveals two large sunspot groups on the surface of the Sun. Sunspots and starspots are produced by magnetic activity, providing information about the internal structure of stars.

A Star Is Born

All stars begin their lives in dense interstellar clouds of gas and dust. Even before they become stars, though, much of their future life and structure is determined by the way they form.

A star is defined by nuclear fusion in its core. Before fusion begins, an object that will become a star is known as a young stellar object (YSO), and it passes through two major stages of development.

The jets and outflows of particles from YSOs can have a profound influence on the surrounding nebula. Since many stars form in a cluster from the same pool of gas and dust, they affect each other’s growth and development in profound ways.

Once YSOs have contracted and heated enough, fusion of hydrogen into helium begins in their cores and they become main sequence stars. The rate of that fusion increases with the mass of the star, so the most massive stars are the shortest-lived.

The lowest-mass stars are known as red dwarfs or M dwarfs. These experience convection — the circulation of matter — throughout their interior. That means they burn for a very long time, giving them lifetimes much longer than the 13.8 billion years the universe has been around. None of these stars have lived through their entire lifecycle yet.

The Sun is a moderate mass star with a lifetime of roughly 10 billion years; we’re currently about halfway through the Sun’s main sequence. Stars in this middle range of mass have a distinct core where fusion takes place, and that limits the available supply of hydrogen to fuse into helium. Once that supply is exhausted, the star leaves the main sequence and swells into a red giant. The core then collapses slightly as it begins fusing helium into carbon and oxygen. Once the available helium supply is used up, the star sheds its outer layers, exposing the remnant of its core. This remnant is a white dwarf.

The highest mass stars consume their available hydrogen even more quickly, passing through the main sequence and helium-fusion phase in a much shorter amount of time. However, these stars have enough mass to keep fusion going, producing heavier elements up to iron. Elements beyond iron on the periodic table require more energy to fuse than is released by the fusion process, so the core of these stars can’t keep up the work. The core collapses under gravity, and the outer layers of the star are blown off in a supernova explosion. For the most massive stars, the cores collapse into black holes; the slightly less massive stars leave behind neutron stars.

During the post-main-sequence evolution when stars grow huge, they may also pulsate in and out due to instabilities in the outer layers of the stellar envelope. These pulsating stars include the Cepheid variables, used in measuring distances within the Milky Way and to nearby galaxies.
In addition, massive stars in the last stages of life are the source of new elements. Fusion during the giant phases of stellar evolution produces elements like carbon, oxygen, and silicon that may be cycled toward the outer layers of the star. For the most massive stars, neutrons from fusion bombard atoms in the star to make yet more elements, including technetium, a rapidly-decaying element that doesn’t exist naturally on Earth. The more stable atoms from the dying star appear in the spectrum of its light, and are shed into interstellar space as the star dies.

The Seismology of Stars

We can’t see directly into a star’s interior. However, just as earthquakes on Earth’s surface reveal what’s going on inside the planet, the behavior of material on the surface of stars provides researchers with information about the interior. Asteroseismology is the study of vibrations of a star.

Naturally, the Sun is the star easiest to study. Researchers have measured the patterns of waves on the surface set up by the flow of atoms and energy deep inside the Sun. For more distant stars, astronomers observe variations in light from these processes. In some stars, the churn of hot matter is enough to produce “starquakes”: more violent fluctuations in the star’s behavior.