With music and lighthearted analogies, Michael Johnson strives to make difficult black hole concepts accessible while staying at the forefront of research. 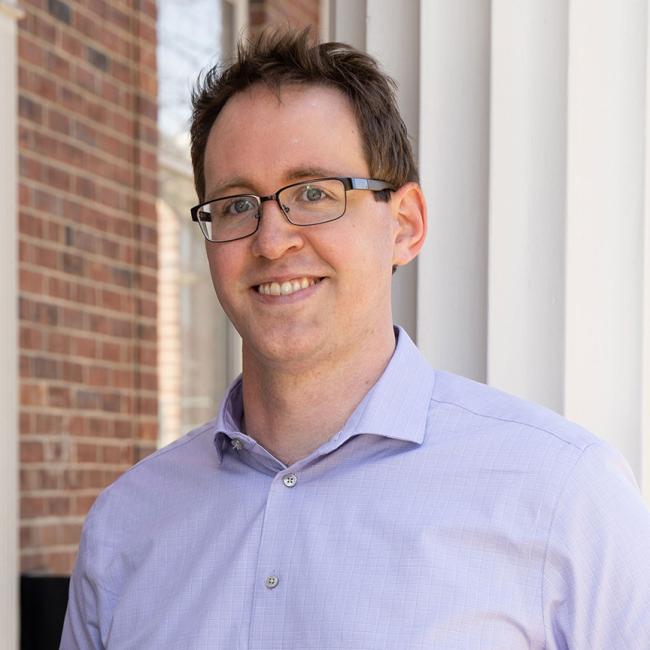 What could ducks splashing in a pond, the Pharrell Williams song "Happy" and a planet-spanning telescope possibly have to do with each other?

The through-line between these disparate, yet connectable things is Michael Johnson. An astrophysicist at the Center for Astrophysics | Harvard & Smithsonian, Johnson is a leading member of the Event Horizon Telescope, a collaboration of radio telescopes spread across the planet — from Greenland to the South Pole — dedicated to capturing never-before-seen images of supermassive black holes.

Today, the EHT team announced their latest groundbreaking result: the first-ever image of the black hole at the heart of our Milky Way galaxy. Known as Sagittarius A* (called "Sgr A-star" for short and pronounced "Sadge A-star"), it is only the second black hole to have ever been directly imaged; the easier-to-study black hole in galaxy M87 was unveiled by EHT researchers in 2019.

"Sgr A* is the crown jewel of the EHT and is really the reason why we built the instrument," says Johnson. "It is wonderful to see Sgr A* at last."

Johnson has worked on the EHT for about a decade since he came to the Center for Astrophysics as a postdoc in 2013. He quickly became a leader in in developing new ways to make sense of the sparse, garbled radio signals emitted by matter heated to billions of degrees and whipping around at terrible velocities. The EHT gathers up those signals through interferometry — an ingenious, though abstruse observational technique that extracts information based on the interference of waves.

This is where the splashing ducks and the hit song from the movie Despicable Me 2 come into play. Johnson created both analogies to effectively explain how the EHT's interferometry works to students and the public.

In sum, across his scientific work revealing black holes and his communication of challenging concepts to the public, Johnson strives to make the incomprehensible comprehensible.

But Johnson's emphasis on accessibility goes beyond waterfowl and pop songs. It's reflected in his leadership role in the overview paper, describing the EHT's latest findings on Sgr A*. The paper is geared toward researchers, science journalists and other audiences who may find the other five very long, very detailed technical EHT papers a bit, well, dense.

Part of Johnson's approach is informed by his experiences as a parent. Johnson, 37, has two children — a daughter, aged 5, and a son, aged 10. Johnson's son has a rare genetic disorder and is nonverbal. Finding ways to effectively communicate with both of his children, given their distinct ways of interacting with and experiencing the world, has broadened Johnson's view.

"Having children really shaped my perspective as a scientist," says Johnson. " I love finding different ways to describe difficult concepts to different people and learning how to speak their language."

Take, for example, the EHT. The instrument consists of multiple telescopes separated by thousands of miles. Each telescope captures faint radio waves from particles called electrons, which are emitted from matter whizzing around the black hole. Taking what each telescope sees, and comparing it to the other telescopes, enables the researchers to carefully construct a picture of the black hole.

Johnson uses an audiovisual presentation to help convey how this all works. Instead of abstract electrons sending out radio waves detected by telescopes, Johnson asks his audience to imagine standing with a friend in the water at the edge of a pond. The audience members can feel the ripples cast out by a group of ducks splashing in the pond. By comparing the arrival times and patterns of the ripples between two friends, who are acting as EHT telescopes in this analogy, it is possible to start sketching out the locations of the wave-forming sources, whether they be ducks or matter accelerated by an invisible cosmic object.

The challenges of interferometry, however, do not end there. EHT telescopes observe a black hole for a small span of time, usually a few nights, and the telescopes are of course not located on every single point on Earth. As a result, the observations are limited in time and space. To fill the gaps, researchers have to infer missing chunks of information using extrapolation algorithms.

The process is actually remarkably similar to how hearing just a smattering of notes can suffice for identifying a song. Each pair of telescopes measures a single image frequency, similar to hearing a single note. By adding more and more telescopes to the EHT, and thus tuning in to ever more notes, the song — or, in this case, the image of Sagittarius A* — becomes knowable. To demonstrate the concept in his presentation, Johnson progressively plays more notes until his audience intuits the song "Happy."

"Every analogy tells you a part of the story, and that's a really big part of my approach and my passion for science," says Johnson.

Johnson encourages his students and peers to do likewise and share their zeal for science in an accessible way to interest and inspire others. Daniel Palumbo, a fourth-year Harvard graduate student who is advised by Johnson and is part of the EHT collaboration, has followed through by speaking to local astronomy clubs.

"There's this innate sense that black holes are cool and people want to hear about them and the work we do with EHT," Palumbo says. "Michael has really shepherded this extraordinary opportunity to engage the public."

Palumbo was one of the many researchers whom Johnson led in overcoming two key obstacles to analyzing Sagittarius A* data. Ionized gas, or plasma, in the space between stars posed the first obstacle. This interstellar plasma scatters radio waves, complicating the clean reception of ripples on the water — to invoke the duck analogy — and the clear intonations of notes, to invoke the song analogy.

"This very dilute interstellar plasma smears and distorts the image of Sgr A*," says Johnson. "It's as though you were looking through frosted glass."

The second obstacle involved the rapid pace at which Sagittarius A* changes in appearance. The first black hole that EHT successfully imaged, in the galaxy M87, is monstrous in size compared to Sagittarius A*. For the M87 object, it takes on the order of nine hours for light to move across the black hole, meaning the black hole's appearance changes relatively slowly. Because Sagittarius A* is much smaller, though, matter whips across its smaller face in mere minutes.

"While we're observing Sgr A*, it is changing right before our eyes," says Johnson. "It's like trying to photograph something that's moving."

To deal with both the scattering effects and highly variable nature of Sagittarius A*, Johnson and his team crafted a suite of special imaging algorithms and models, building on their success in isolating and interpreting relevant information in the observing campaign for M87. The process, however, proved considerably challenging and required additional years of data crunching. (The observations underpinning both the new Sagittarius A* and the prior M87 results were obtained in 2017, during EHT's first run.)

"Michael is absolutely unafraid to get his hands dirty," says Palumbo, noting the depth of Johnson's involvement in the nitty-gritty, day-to-day honing of computational code to fulfill data analysis tasks. "He's on the front lines of the research as much as he is helping students."

Johnson's affinity for the details harkens back to his scientific exposure as a child. He was born in Tunisia and grew up in Oregon, where his father was a professor of rangeland ecology at Oregon State University. Together, they studied the dynamics of herds of cows and sheep on landscapes and the growth of weeds and vegetation. At an early age, Johnson learned to write computer programs for data analysis and visualization, skills that he has continued to rely on even as he moved to researching black holes.

"Things I learned there [studying rangeland ecology], I use everywhere," he says.

Looking ahead, Johnson is eager to keep advancing scientific art with the EHT, delivering ever-sharper observations of supermassive black holes in order to delve deeper into the fundamental physics of the universe.

"We've made lots of improvement to the EHT array since we took these first observations five years ago," says Johnson. "We already have data in the can that are going to help us make better images."

The ambitions for EHT will not stop there.

Johnson serves as the project scientist of the next-generation EHT (ngEHT), an initiative to dramatically expand the current array's capabilities. He likens the improvement as going from a few snapshots initially taken with EHT, to the longer exposure images now increasingly possible, to eventually full-fledged movies of black holes in action.

Without a doubt, Johnson says, the best is yet to come.

"As excited as we are about this first image of Sgr A*, it just feels like the starting point that defines the next century of research," he says. "This is not the end. This is just the beginning of the next generation of scientific discovery about our universe."