In simultaneous press conferences across the globe, astronomers have revealed the first image of the supermassive black hole at the center of the Milky Way galaxy: Sagittarius A*. 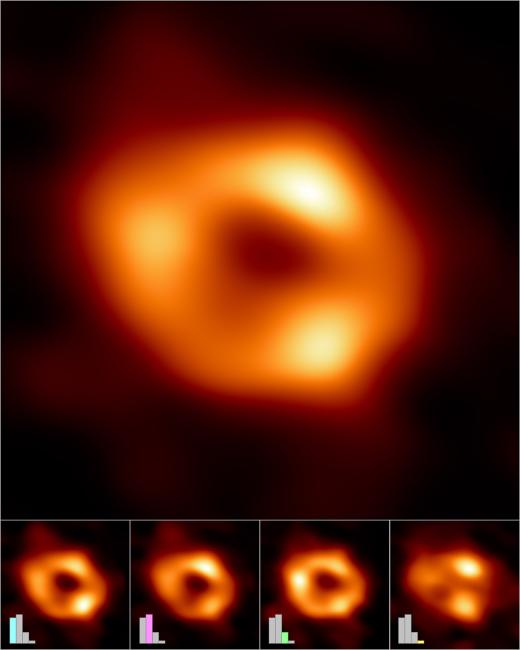 Washington, D.C. – Astronomers unveiled the first image of the supermassive black hole at the center of the Milky Way galaxy in simultaneous press conferences around the world today.

The result provides overwhelming evidence that the object at the heart of our galaxy is indeed a black hole and yields valuable clues about the workings of such giants, which are thought to reside at the center of most galaxies. The image was produced by a global research team called the Event Horizon Telescope (EHT) — which includes scientists from the Center for Astrophysics | Harvard & Smithsonian (CfA) — using observations from a worldwide network of radio telescopes.

The image, described today in a special issue of The Astrophysical Journal Letters, is a long-anticipated look at the massive object that sits at the very center of the Milky Way. Scientists had previously seen stars orbiting around something invisible, compact and very massive in our galaxy’s core. This strongly suggested that the object — known as Sagittarius A*, or Sgr A* — was a black hole; today’s image provides the first direct visual evidence of it.

"For decades, astronomers have wondered what lies at the heart of our galaxy, pulling stars into tight orbits through its immense gravity," says CfA astrophysicist Michael Johnson. "With the EHT image, we have zoomed in a thousand times closer than these orbits, where the gravity grows a million times stronger. At this close range, the black hole accelerates matter to close to the speed of light and bends the paths of photons in the warped spacetime."

The black hole itself is completely dark, yet glowing gas around it reveals a tell-tale signature: a dark central region, called a shadow, surrounded by a bright ring-like structure. This new view shows light bent by the powerful gravity of the black hole, which is four million times more massive than the Sun.

"We now see that the black hole is swallowing the nearby gas and light, pulling them into a bottomless pit," says Ramesh Narayan, a theoretical astrophysicist at the CfA. "This image confirms decades of theoretical work to understand how black holes eat."

Sagittarius A* is about 27,000 light-years away, appearing to those on Earth to have the same size in the sky as a donut on the Moon. To image it, the team created the powerful EHT, which linked together eight existing radio observatories across the planet to form a single "Earth-sized" virtual telescope.

Based on the summit of Maunakea Hawaii, the Submillimeter Array (SMA), a joint operation between the CfA and Academia Sinica Institute of Astronomy and Astrophysics, was one of the eight instrumental telescopes utilized to capture the image. Together, the telescopes observed Sgr A* on multiple nights in 2017, collecting data for many hours in a row, similar to using a long exposure time on a camera.

"Over 10 years ago, we linked radio dishes in California and Arizona to the SMA and other telescopes in Hawaii, allowing us to discover features in Sgr A* that were the size of the black hole shadow. This breakthrough launched the EHT, leading us to the wonderful Sgr A* image revealed today," says Sheperd "Shep" Doeleman, founding director of the EHT.

Today's breakthrough follows the EHT collaboration's 2019 release of the first image of a black hole, called M87*, at the center of the more distant Messier 87 galaxy.

The image of Sgr A*, only the second-ever picture captured of a black hole, shows that black holes look remarkably similar, even though Sgr A* is more than a thousand times smaller and less massive than M87*.

"It's amazing to see how similar the images look even when the sizes and surrounding environments of these two black holes are very different," says NASA Einstein Fellow and CfA astrophysicist Sara Issaoun. "This similarity originates from the most fundamental property of black holes: their extreme gravity. The influence of this extreme environment on the trajectory of the light we observe from orbiting gas creates the shadow."

But the process of imaging Sgr A* was considerably more difficult than for M87*, even though Sgr A* is much closer to Earth.

"A day in the life of M87* corresponds to just a minute in the life of Sgr A*, and our telescopes have to observe for many hours to collect enough data to make an image, so the appearance of Sgr A* is constantly changing even as we're trying to image it," says CfA astrophysicist Dominic "Dom" Pesce.

The researchers had to develop sophisticated new tools that accounted for the gas movement around Sgr A*. While M87* was an easier, steadier target, with nearly all images looking the same, that was not the case for Sgr A*. Because of this, today's image of the Sgr A* black hole is an average of the different images the team extracted, finally revealing the giant lurking at the center of the Milky Way galaxy.

The effort was made possible through the ingenuity of more than 300 researchers from 80 institutes around the world that together make up the EHT Collaboration. In addition to developing complex tools to overcome the challenges of imaging Sgr A*, the team worked rigorously for five years, using supercomputers to combine and analyze their data, all while compiling an unprecedented library of simulated black holes to compare with the observations.

The team is particularly excited to finally have images of two black holes of very different sizes, which offers the opportunity to understand how they compare and contrast. The scientists have also begun to use the new data to test theories and models of how gas behaves around supermassive black holes. This process is not yet fully understood but is thought to play a key role in shaping the formation and evolution of galaxies.

"Never before have we had so much data on a black hole, and it comes at a crucial moment when our models of how gas behaves in its vicinity are in dire need of revision," says CfA astrophysicist Angelo Ricarte. "The EHT is ushering in a new era of precision black hole astrophysics."

The EHT continues to make progress on imaging black holes. A major observation campaign in March 2022 included more telescopes than ever before. The ongoing expansion of the EHT network and significant technological upgrades will allow scientists to share even more impressive images as well as movies of black holes in the near future.

"The next-generation Event Horizon Telescope project, or ngEHT, was launched in 2019, and will double the number of radio dishes in the global array," says Doeleman, who directs the ngEHT. "By filling in the Earth-sized lens and observing at new frequencies, the ngEHT will capture black holes in motion."

Since then, the EHT has added the Greenland Telescope (GLT), which is operated by ASIAA and the CfA, the NOrthern Extended Millimeter Array (NOEMA) and the UArizona 12-meter Telescope on Kitt Peak to its network.

About the Event Horizon Telescope (EHT)