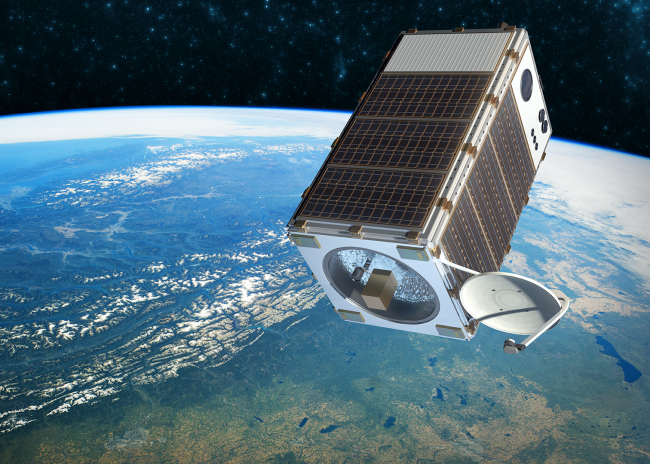 MethaneSAT, shown in an artist's rendering, aims to use new technology to map and measure human-made emissions globally, to help reduce methane pollution.

Researchers at the Harvard-Smithsonian Center for Astrophysics (CfA) and the Harvard School of Engineering and Applied Sciences (SEAS) have partnered with the Environmental Defense Fund (EDF) to develop and launch a new satellite called MethaneSAT in late 2020 or early 2021 and turn the data into action. This project will measure methane emissions from oil and gas industry and other major human-made sources around the globe to catalyze global action to reduce global oil and gas emissions by 45% by 2025.

EDF has partnered with the CfA and SEAS to complete the basic science and technical strategies for MethaneSAT, and expect to complete final science and mission requirements and set a launch schedule later this year. The mission is being funded as part of the TED non-profit organization’s new Audacious Project for supporting world-changing ideas.

While much of the attention on the Earth’s warming atmosphere has properly focused on carbon dioxide emissions, methane emissions cause about a quarter of the global warming. Much of the methane emissions come from leakage and other practices by the oil and natural gas industries. Reducing these emissions will have substantial economic as well as environmental benefit.

MethaneSAT will measure methane from oil and gas fields in 200-kilometer-wide strips as it scans the planet from space. With resolution of about one kilometer or better, major individual sources of methane production almost anywhere on the planet can be identified. Scientists will use MethaneSAT to monitor areas that account for more than 80% of global oil and gas productions on a weekly basis or even more frequently. MethaneSAT will additionally measure methane from feedlots, landfills, cities, and natural sources.

The unique partnership supporting MethaneSAT will allow it to leverage the scientific and engineering expertise and infrastructure being developed for other satellite projects at the CfA including the upcoming Smithsonian/NASA Tropospheric Emissions: Monitoring of Pollution, or TEMPO mission, which also has a goal to launch in 2020 or 2021 and other satellite projects. The MethaneSAT ground systems can be appended into those for TEMPO by adding more hardware (disk, CPUs, etc.) without rebuilding the ground systems from scratch. CfA scientists will determine methane abundances from the science telemetry received at ground systems. Then Harvard SEAS scientists will use these data to determine the sources of methane emissions and quantify the emission of each source.

Data from MethaneSAT will be freely, publicly available to the industry, scientists, governments, and any other interested users. More information on MethaneSAT can be found at https://www.edf.org/media/edf-announces-satellite-mission-locate-and-mea...