The Sensing the Dynamic Universe (SDU) project creates sonified videos exploring the multitude of celestial variables such as stars, supernovae, quasars, gamma ray bursts and more. We sonify lightcurves and spectra, making the astrophysics of variables and transients accessible to the general public, with particular attention to accessibility for those with visual and/or neurological differences. 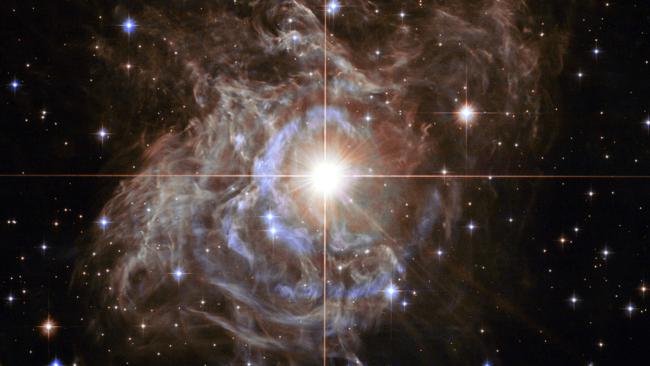 The pulsating variable star, RS Puppis, is a Cepheid type variable star taken by the Hubble Space Telescope. Cepheid variables have a well-defined relationship between pulsation period and luminosity, which makes them valuable for calculating distances to nearby galaxies.

Here is a sonified video of the spectrum for the observed type 1 Cepheid variable. This video scans across a plot of brightness measured in flux or intensity of light (y axis) versus wavelength (x axis), moving from blue to red wavelengths from 4100 to 8800 angstroms. Lower pitch represents weaker flux. Because the Classical Cepheid star is a hot giant star, the spectrum video begins with a peak in the blue, short wavelength end, interrupted by some rapid fluctuations caused by absorption by calcium and hydrogen atoms in the atmosphere. The peak is followed by a gradual decrease in flux (pitch) as wavelength increases. Absorption lines towards the longer, red wavelengths in the spectrum are caused by hydrogen atoms.

The next sonified video is a phased light curve for the Classical Cepheid variable star. This star was determined to pulsate on a short interval - about every 1 day and 5 hours. In the video, you should hear two full phases, each consisting of an extended dimming period followed by the pulsation which is heard as a rapid increase in brightness. The video scans over phase (x-axis) and modulates pitch based on magnitude (y-axis). Lower pitch represents dimmer magnitudes.