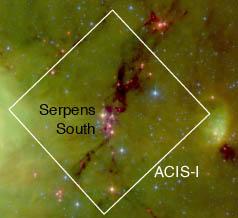 A false-color infrared photograph of the Serpens cluster, showing its young stars peering out from deep within a dense ridge of dust that obscures the optical light. Astronomers used X-ray (ACISI-I) images of the region to conclude that a number of these stars are indeed very young even though they do not host disks of material around them. The stars may have lost their disks due to interactions in the cluster, whereas usually diskless stars are older.

Stars frequently form in crowded environments. By combining the resources of multi-wavelength missions like Chandra in the X-ray and Spitzer in the infrared, astronomers are able to resolve ambiguities and assemble a much more complete census of cluster content and the individual properties of the population. A case in point is the development of disks (possibly protoplanetary) around new stars. Disks form along with the new star and then evolve over a few million years before dissipating, perhaps leaving planets behind, and in clustered environments their development can be influenced by interactions with neighbors.

Stellar disks are warmed by their stars and were first spotted via the infrared emission from the warm dust. More evolved young stars without disks lack this characteristic infrared signature and thus can be identified as the the more evolved ones in a cluster. Young stars were also discovered to emit elevated levels of X-rays as compared to main-sequence stars because of their still-developing internal circulation. (In fact, young stars can have luminosities thousands of times brighter in X-rays than their older stellar counterparts.) In a crowded cluster environment, however, where other factors besides age are thought to be able to inhibit or disrupt the development of a disk, the X-ray emission offers an independent tool to identify those young stars without disks.

The Serpens South cluster of stars, estimated to be located about 900 light-years away in the direction of the constellation Serpens, is very young and its stars are heavily masked by the thick natal dust in their environment – indeed, it is thought to be among the youngest regions near us, making it an important test-bed for the study of disk evolution in clustered environments. CfA astronomers Elaine Winston and Scott Wolk and two collaborators used data from Chandra and Spitzer to analyze sixty-six young stars in the cluster with both infrared and X-ray emission. They found five stars that appeared to be diskless and old because they lacked the infrared signature of disks, but based on their X-ray emission they are actually still quite young: Their disk dissipation is the result not of aging but of cluster interactions, consistent with the theory. The team was also able to address a long-standing dispute over the distance to the cluster. Many astronomers had assumed it was as much as three-thousand light-years away, the same distance as another cluster in that region of sky, but the intrinsic X-ray brightness of young stars in clusters is known to follow a relatively narrow distribution of values, and the observed X-ray emission of these stars argues against the farther distance estimate and in favor of the 900 light-tear value.