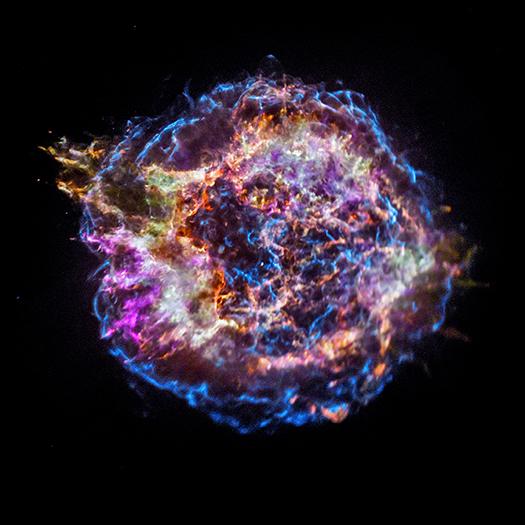 Cassiopeia A: A supernova remnant about 11,000 light from Earth.

Where do most of the elements essential for life on Earth come from? The answer: inside the furnaces of stars and the explosions that mark the end of some stars' lives.

Astronomers have long studied exploded stars and their remains — known as "supernova remnants" — to better understand exactly how stars produce and then disseminate many of the elements observed on Earth, and in the cosmos at large.

Due to its unique evolutionary status, Cassiopeia A (Cas A) is one of the most intensely studied of these supernova remnants. A new image from NASA's Chandra X-ray Observatory shows the location of different elements in the remains of the explosion: silicon (red), sulfur (yellow), calcium (green) and iron (purple). Each of these elements produces X-rays within narrow energy ranges, allowing maps of their location to be created. The blast wave from the explosion is seen as the blue outer ring.

X-ray telescopes such as Chandra are important to study supernova remnants and the elements they produce because these events generate extremely high temperatures — millions of degrees — even thousands of years after the explosion. This means that many supernova remnants, including Cas A, glow most strongly at X-ray wavelengths that are undetectable with other types of telescopes.

Read more about Cassiopeia A...