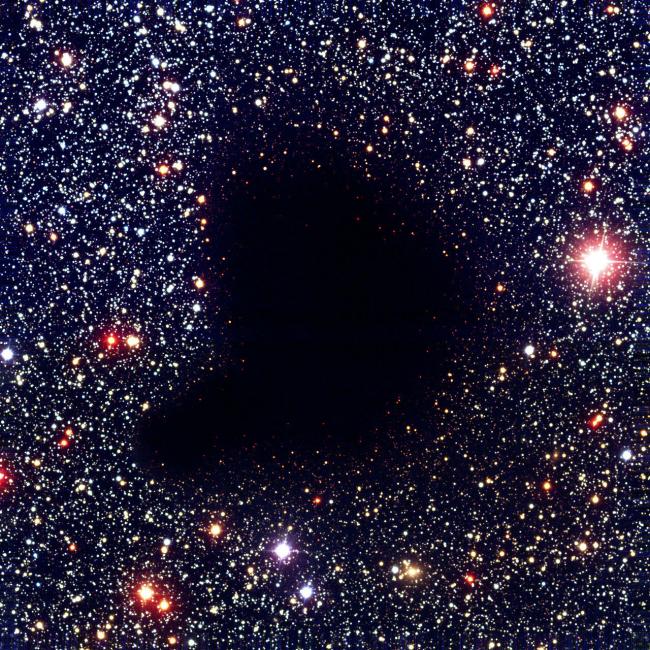 A composite visible and near-infrared image of the interstellar dark cloud, Barnard 68. The gas and dust in its interior is very cold, but can be heated by cosmic rays. A new study predicts that the infrared emission lines of molecular hydrogen in dark clouds provide key diagnostics of cosmic rays in the interstellar medium.

The ionization of the neutral gas in an interstellar molecular cloud plays a key role in the cloud’s evolution, helping to regulate the heating and cooling processes, the chemistry and molecule formation, and coupling the gas to magnetic fields. Usually starlight provides this ultraviolet radiation, but it is mostly restricted to localized regions near massive stars. For the bulk of the neutral gas in the Milky Way, ionization is governed by low energy cosmic-rays (CRs), fast-moving protons or atomic nuclei. Direct observations from the Earth can only probe high energy CRs because the solar wind restricts the penetration of CR into the solar system, but in the past few decades, the total CR ionization rate has been estimated indirectly with observations of diagnostic molecules and ions. Those values, however, rely on some uncertain estimates like the abundances of secondary species, gas densities, the rates of chemical reactions and not least, the amount of the dominant molecular species, molecular hydrogen.

The mass of molecular clouds is dominated by molecular hydrogen. The gas in these clouds is very cold, perhaps only a few tens of degrees above absolute zero, and hydrogen molecules are in their least excited state. Shocks passing through the gas can temporarily heat the molecules; the radiation they then emit as they cool down has been seen for decades. Ultraviolet light can also excite the gas to radiate. But shocks are rare and ultraviolet radiation cannot penetrate into the depths of these cold clouds. Cosmic rays can penetrate the clouds, and therefore are expected to dominate the ionization and excitation of the molecular hydrogen.

CfA astronomer Shmuel Bialy has modeled the emission lines from molecular hydrogen in cold clouds excited by cosmic rays. He finds that the brightest emission comes from lines with near-infrared wavelengths arising from vibration and rotation of the molecules. Using the ratios of line strengths, he is able to determine if the molules have been excited by cosmic rays, and determine their strength. Observation of these lines in clouds across the galaxy could determine how effectively the cosmic rays penetrate the clouds and constrain the cloud formation processes, and how much the cosmic ray flux varies between locations in the galaxy.