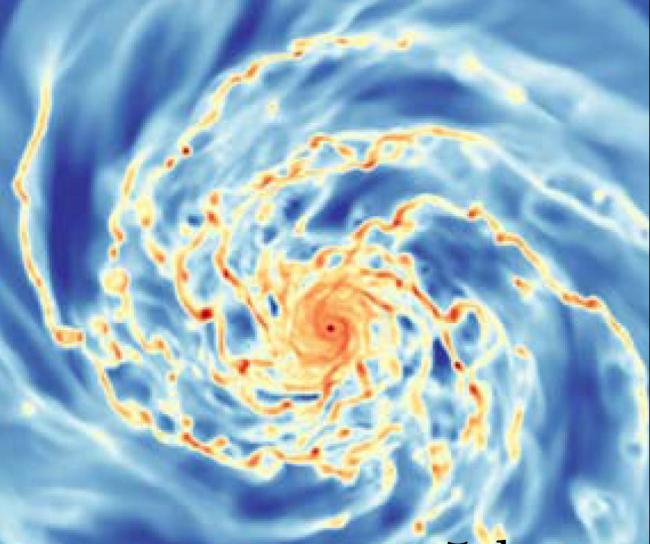 An image of a galaxy seen face-on in a simulation. It shows the distribution of gas over the galaxy (red is higher density and blue is lower density); the clumpiness of the gas is apparent. When cosmic ray transport is suppressed, the simulations show that this clumpiness is reduced, in turn reducing the star formation activity. Astronomers modeling cosmic-ray influences on star formation have motivated their simulations with gamma-ray observations to investigate cosmic ray transport.

The triggering of star formation, and also its quenching, is regulated by young massive stars in galaxies which inject energy and momentum into the interstellar medium. Feedback from the supermassive black holes at galaxies’ nuclei plays a similarly important role. These processes drive the massive gas outflows observed in galaxies, for example. However the details including how they work and the relative roles of the different feedback processes are actively debated. Cosmic rays in particular are accelerated in strong shocks formed by supernova explosions and stellar winds (both aspects of star formation), and generate considerable pressure in the interstellar medium. They play a central role in regulating thermal balance in dense molecular clouds where most stars form and may play an important role in regulating star formation, driving galactic winds, and even in determining the character of the intergalactic medium. Astronomers believe that a key property limiting cosmic ray influence is the ability to propagate out of the sites where they are produced into the interstellar medium and beyond the disk, but the details are not very well understood.

CfA astronomer Vadim Semenov and two collaborators used computer simulations to explore how such a variation of cosmic ray propagation can affect star formation in galaxies, motivated by recent observations of gamma-ray emission from nearby sources of cosmic rays including star clusters and supernova remnants. The observations probe the propagation of cosmic rays because a significant fraction of gamma-ray emission is believed to be produced when cosmic rays interact with interstellar gas. The observed gamma-ray fluxes suggest that cosmic ray propagation near such sources can be locally suppressed by a significant factor, up to several orders of magnitude. Theoretical works suggest that such suppression can result from nonlinear interactions of cosmic rays with magnetic fields and turbulence.

The scientists used the simulations to probe the effects of suppressing the transport of cosmic rays near the sources. They find that suppression causes a local pressure buildup and produces strong pressure gradients that prevent the formation of the massive clumps of molecular gas that make new stars, qualitatively changing the global distribution of star formation, especially in massive, gas-rich galaxies which are prone to clump formation. They conclude that this cosmic-ray effect regulates the development of the structure of the galaxy's disk and is an important complement to the other processes active in shaping the galaxy.