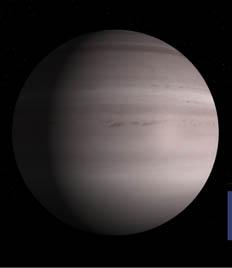 An artist's conception of K2-22b, an exoplanet slightly smaller in size than Neptune. Observations suggest that this exoplanet is in disintegrating, and has debris in a trailing and leading dust tails.

Exoplanet surveys have yielded many surprises over the years, and the discovery of "disintegrating" exoplanets was one of them. These are planets that produce asymmetric shapes in the dips of the light curves seen as they transit across the faces of their stars. The asymmetry is hypothesized to be due to tails of dusty material from the planets' disintegration. At present, only three such planets known around main sequence stars, one being K2-22b. There are currently over 3800 confirmed exoplanets, suggesting either that such objects are intrinsically rare or that they have very short lifetimes, in which case it is lucky to catch any in the act of disintegration. These systems have been under intense study to better understand their formation and evolution and to constrain the properties of the grains in the dust tails.

CfA astronomers George Zhou, Karen Collins, Allyson Bieryla, and Dave Latham were members of a team that obtained forty-five ground-based observations of the K2-22 system in their study of the evolution of its transit. K2-22b is a Neptune-sized exoplanet that orbits its star in only about nine hours; it is unusual in that it appears to have not only a trailing dust tail but a leading trail as well. The team’s observations of the dust tails included observing the transits at multiple wavelengths to try to use color to characterize the dust grain size or composition, but except in one transit event no differences were seen. The color information is, however, consistent with the previous model of dust grains as being small - comparable to or smaller than optical light wavelengths. The astronomers also confirmed the variability of the transits, thought to be evidence of the continuing rapid evolution of the dust tails. The scientists point out that this variability appears in all three disintegrating planets, and the shape variability occurs on all the timescales observed, from transit to transit and over several years. They conclude that a continuous observing campaign would be a valuable tool in unraveling the mystery of these dusty trails.