The U.S. Extremely Large Telescope Program, which includes the Giant Magellan Telescope, was ranked mission critical by the 2020 Decadal Survey on Astronomy and Astrophysics. 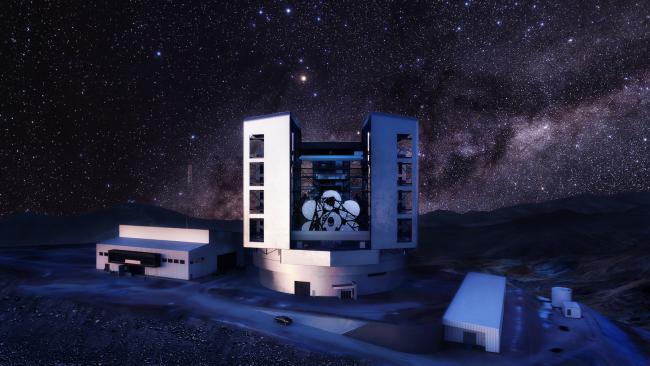 Pasadena, CA -- The 2020 Decadal Survey for Astronomy and Astrophysics has recommended federal support for the final construction stages of the Giant Magellan Telescope (GMT) as part of the U.S. Extremely Large Telescope Program (US-ELTP). The Center for Astrophysics | Harvard & Smithsonian (CfA) is part of an international consortium contributing key instrumentation technology and philanthropic support for the GMT.

The highly anticipated report ranked the US-ELTP as the top frontier project for ground-based observatories and detailed that building an extremely large telescope "is absolutely essential if the United States is to maintain a position as a leader in ground-based astronomy."

"We are incredibly honored to be ranked as a top priority in the decadal survey and are grateful for the many scientists who engaged in the process," said Robert Shelton, president of the GMT. "This endorsement solidifies the scientific momentum that our founding consortium of international universities and research institutions pioneered years ago. After all, we designed the Giant Magellan Telescope to discover the unknown, and it's the unimaginable discoveries that could change humanity forever."

"This endorsement from the decadal survey is tremendous and validates the years of hard work our scientists have spent developing GMT technologies," says Charles Alcock, GMTO board member and director of the CfA.

The GMT was evaluated in Astro2020 as a core partner of the US-ELTP. The goal of the program is for the NSF's NOIRLab to provide U.S.-based astronomers with full sky observing access to the GMT in the Southern Hemisphere and the Thirty Meter Telescope in the Northern Hemisphere. The US-ELTP was viewed by Astro2020 as a visionary program that will enable collaborative, inclusive, and transformational research in nearly all areas of astrophysics — from understanding the fundamental nature of the universe to the search for life on distant exoplanets.

"We are proud to be part of the US Extremely Large Telescope Program and its bold vision to provide full-sky access to the astronomical community," said Walter Massey, board chair of the Giant Magellan Telescope and former director of the National Science Foundation. "A heartfelt congratulations to both the Thirty Meter Telescope and NOIRLab. This strong recommendation is the result of many years of hard work. It is a great time to support and join our inspirational project and help secure access to these amazing telescopes for decades to come."

The 24.5-meter aperture GMT is positioned to put a federal investment to good use. Construction is well underway on Las Campanas Peak at the southern edge of Chile's Atacama Desert, one of the best locations on Earth to explore the heavens. The project has completed hard rock excavation for the foundation and support infrastructure, cast six of seven primary mirrors, begun fabricating its first adaptive secondary mirror, and has already secured a subaward from the National Science Foundation to accelerate the prototyping and testing of some of the most powerful optical and infrared technologies ever engineered.

Astro2020 highlights the GMT's 368-square-meter light collecting power, unmatched 25-arcminute field of view, advanced adaptive optics system and high-resolution spectroscopic and diffraction-limited imaging capabilities. The report emphasizes that the "capabilities can be brought to bear on nearly all of the important science questions laid out by this decadal survey, across all three of our key science themes." These inspiring scientific priorities include pathways to habitable worlds, new windows on the dynamic universe, and drivers of galaxy growth. The recommendation also stated that the US-ELTP “provides observational capabilities unmatched in space or the ground and opens an enormous discovery space for new observations and discoveries not yet anticipated."

"The GMT will bring us a wealth of knowledge about the universe, studying everything from exoplanets to the faintest galaxies to black holes,” says Daniel Eisenstein, GMTO board member and astronomer at the CfA. "This is indeed an incredible time for the field of astrophysics."

The GMT's international consortium is deeply gratified by the enormous global support received from the scientific and philanthropic communities. The consortium would also like to recognize the ngVLA and CMB-S4 teams on their strong Astro2020 endorsements. Together, the recommendations will help build vibrant opportunities in astronomy and contribute to significant science discoveries for the 2030s and beyond.

The GMT is the work of an international consortium of leading universities and research institutions representing five countries. To learn more, visit gmto.org.