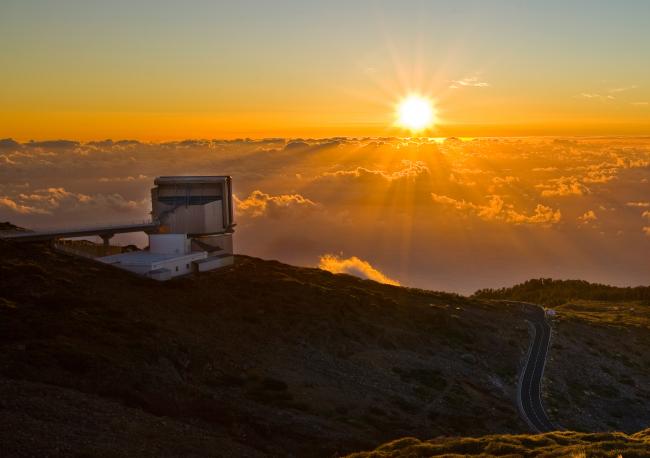 The search for planets outside our solar system continues to heat up. NASA's Kepler spacecraft has located more than 1,200 planetary candidates, however confirming them remains a challenge. In some circumstances, an eclipsing binary star can mimic the shallow dimming due to a planet crossing in front of its star. Ground-based measurements are needed to verify an orbiting world by spotting the gravitational wobbles it induces in its host star, in a method known as radial velocity.

The Harvard-Smithsonian Center for Astrophysics (CfA) continues to be a major player in the planet-hunting realm. CfA is part of an international collaboration building a new instrument called HARPS-North. (HARPS stands for High-Accuracy Radial velocity Planet Searcher.) This precision spectrograph is designed to detect the tiny radial-velocity signal induced by planets as small as Earth, if they orbit close to their star. It will complement Kepler by helping to confirm and characterize Kepler's planetary candidates.

"The Kepler mission gives us the size of a planet, based on the amount of light it blocks when it passes in front of its star. Now we need to measure planetary masses, so that we can calculate the densities. That will allow us to distinguish rocky planets and water worlds from ones dominated by atmospheres of hydrogen and helium," explained Smithsonian astronomer David Latham.

A spectrograph operates by splitting the light from a star into its component wavelengths or colors, much like a prism. Chemical elements absorb light of specific colors, leaving dark lines in the star's spectrum. Those lines shift position slightly due to the Doppler shift created by the gravitational tug of an orbiting planet on its star.

HARPS-N will essentially duplicate the successful design of an existing instrument in the Southern Hemisphere, the original HARPS. It will be augmented by technology now under development, such as a laser comb for wavelength calibration, which will allow it to detect subtle radial-velocity signals.

The original HARPS operates on the 3.6-meter European Southern Observatory telescope at La Silla, Chile. HARPS-N will be installed on the 3.6-meter Telescopio Nazionale Galileo (TNG) in the Canary Islands. From this location, it will be able to study the same region of the sky viewed by the Kepler spacecraft, within the northern constellations of Cygnus and Lyra.

"We have set up an enthusiastic collaboration among various institutions to build a northern copy of HARPS. We all expect HARPS-N to be as successful as its southern 'brother,'" said HARPS-N principal investigator Francesco Pepe of the Astronomical Observatory of Geneva.

"HARPS-N will pursue the most interesting targets found by Kepler, at a level that no one else in the world can do," said Dimitar Sasselov, Director of the Harvard Origins of Life Initiative. "HARPS-N will partner with Kepler to characterize worlds enough like Earth that they might be able to support life as we know it."

First light for HARPS-N is anticipated in April 2012.

The HARPS-N project is led by the Astronomical Observatory of the Geneva
University (Switzerland). The National Institute for Astrophysics (INAF, Italy) has agreed to provide 80 observing nights per year over five years to use HARPS-N coupled to the TNG. The U.S. partners are the Harvard-Smithsonian Center for Astrophysics and the Harvard University Origins of Life Initiative; and the UK partners are the Universities of St. Andrews and Edinburgh, and the Queens University of Belfast.