A Massive Galaxy Long Ago and Far Away 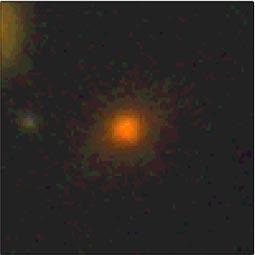 An extremely massive elliptical galaxy at about three billion years after the big bang, as seen in an optical/near-infrared image. The galaxy is about ten times more massive than the Milky Way. Today the galaxy is not actively producing new stars, but its population of old, red stars appears to be the result of earlier episodes during which the galaxy was one of the most active star-forming examples known.

Galaxies today fall roughly into two categories: elliptically-shaped collections of reddish, old stars that formed predominantly during a period early in the history of the universe, and spiral shaped objects dominated by blue, young stars. The Milky Way is an example of the latter, a spiral galaxy actively making new stars. In order to understand the growth of galaxies over cosmic time and the past star formation history of the universe, astronomers study the population of old stars in distant ellipticals from earlier epochs, stars which in turn formed at an even early time. Star formation produces supernovae which enrich their environments with elements, including the diagnostic element magnesium. Measuring the amount of magnesium (relative to iron) in a galaxy thus helps to fix the strength and duration of prior episodes of star formation.

CfA astronomers Charlie Conroy and Jieun Choi and eight colleagues used the spectrometer on the Keck telescope (along with some secondary datasets) to obtain very sensitive magnesium measurements in one of the most massive and luminous elliptical galaxies known. The galaxy, seen at an epoch only three billion years after the big bang, has a stellar mass of about three hundred billion solar-masses (the Milky Way’s stellar mass is about ten times less) but is currently making stars at a rate only about half that of the Milky Way. However, it's magnesium-to-iron ratio indicates that earlier in its life it was making stars at a phenomenally high rate, perhaps as many as several thousand solar-masses each year, making it one of the most vigorous examples of star-formation known.

The scientists conclude that the bursts of star formation in this galaxy must have been due to mergers with other galaxies. In fact, they estimate that the object probably doubled in sized as a consequence of accreting smaller galaxies. Unfortunately this particular elliptical is so unusual that it cannot be considered a typical progenitor for any local elliptical galaxy. The team argues that additional observations of more, less extreme ellipticals in the early universe are now needed to fill in the rest of the story. The instruments on the James Webb Space Telescope, to be launched next year, should be capable of doing so.

Optical and Infrared Astronomy, Harvard University Department of Astronomy
The H3 Survey is answering the question: how did the Milky Way Galaxy grow and assemble over cosmic time? To answer this question, a group of scientists at the CfA and the University of Arizona are mapping the outer limits of the Galaxy with >200,000 stars observed with the 6.5m MMT telescope in Arizona.
2