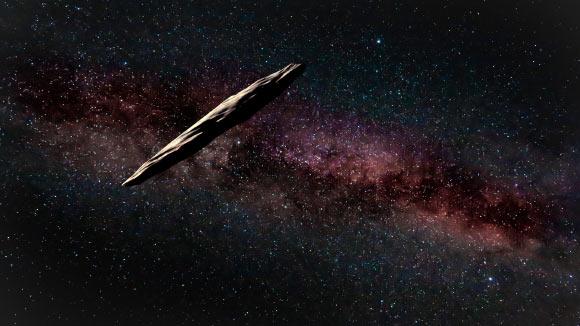 An artist's rendering of 'Oumuamua, a visitor from outside the solar system. Astronomers used the IRAC camera on the Spitzer Space Telescope to set a limit on the infrared emission from 'Oumuamua and thus to estimate its size.

One year ago this week astronomers discovered an unusual object moving through space not too far from the Earth's orbit. In just a few days they realized it could not be a normal asteroid or comet – its path showed that it was not gravitationally bound to the solar system. It was, therefore, the first interstellar body ever discovered in our solar system that originated from outside it. It was given the Hawaiian name 'Oumuamua, "scout."

'Oumuamua might therefore be a rare scientific resource, and it became the subject of an intense, though brief, observing campaign - brief because it was so fast moving that it quickly became too distant and faint to detect. Nevertheless, the observations that were completed found that it was reddish in color, with no apparent spectral features and no signs of gas or dust. All these suggest it might be something like a primitive ("D-type") asteroid, although in truth there is no good analog known in our solar system. Most remarkable of all, as it rotated its variable light curve revealed that it has a very elongated shape: six times longer than it is wide.

The IRAC camera on the Spitzer Space Telescope is currently about 155 million miles from Earth, and had a very different viewing angle toward 'Oumuamua than did Earth-bound telescopes. CfA astronomers Joe Hora, Howard Smith and Giovanni Fazio, together with their long-standing team of Near Earth Object scientists and other colleagues, pointed IRAC at the spot in the sky where predictions placed 'Oumuamua (because it is not bound to the Solar system and is so fast moving, 'Oumuamua’s path in the sky was comparatively difficult to calculate). After thirty hours of staring – a relatively long time – the object was not detected, and subsequent orbital analyses confirmed that the camera was pointed correctly towards it. The limit to its emission, however, was so low that it enabled the team to constrain some of its physical properties. The lack of an infrared signal, for example, suggests it has no gas or dust, species that would be expected if it were a cometary-like body. The scientists also calculate that, depending on its exact composition and reflectivity, 'Oumuamua is at least 240 meters (and maybe as much as one kilometer) in its longest dimension (for Star Trek aficionados, some fans estimate the length of the Enterprise to be 725 meters). The object has now moved too far for any of our telescopes to see it, and so although it will remain an interstellar mystery, it reminds us yet again that our cosmic neighborhood is full of surprises.