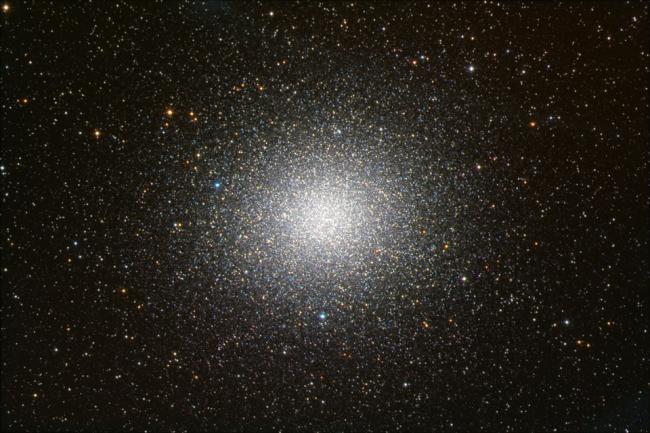 An optical image of the brightest globular cluster, Omega Centauri, a group of over ten million stars older than the Sun. Astronomers have developed a new computational method to determine the abundance of oxygen in these and similar stars, and in particular in giant stars. The code finds values that are more self-consistent than previous estimates.

Oxygen is the third most abundant element in the universe, after hydrogen and helium. It is an important constituent of the clouds of gas and dust in space, especially when combined in molecules with other atoms like carbon, and it is from this interstellar material that new stars and planets develop. Oxygen is, of course, also essential for life as we know it, and all known life forms require liquid water and its oxygen content. Oxygen in molecular form, especially as water, was supposed to be relatively abundant, but over the past decade considerable attention has been paid to observations suggesting that at least in molecular form oxygen is scarcer than expected, a deficit that has not yet been entirely resolved.

Atomic oxygen by contrast, seen most prominently in the light of stars, was thought to be in good agreement with expectations. The neutral oxygen atom produces strong lines that are frequently used to calculate its abundance. Models fit the line strengths by taking into account the radiation field, the star's hot gas motions, and the internal structure of the star (for example, the way the temperature and pressure change with radius). It turns out, however, that varying assumptions in these calculations can result in oxygen abundance predictions that differ significantly, and in the case of giant stars, which are larger and cooler and often have hot outer chromospheres, those abundance results can disagree with one another by as much as a factor of 15. This discrepancy has often been discounted by scientists arguing that some of the proposed stellar models are themselves unrealistic.

CfA astronomers Andrea Dupree, Eugene Avrett, and Bob Kurucz have tacked this fundamental problem with Avrett's PANDORA code for stellar atmospheres. In particular, they include the effects of a hot outer atmosphere in giant stars, something that was typically ignored. Moreover, they do not tie the excitation of oxygen atoms (and the corresponding line strengths) to the local temperature. That constraint, imposed by most previous methods in order to simplify the calculations, does not take more complex situations (like the hot atmosphere) adequately into account. The astronomers find that their new computations can resolve several outstanding issues. The lines themselves are actually as much as three times stronger than previously thought, reducing the implied oxygen abundances, and thereby also affecting details of the stellar interior models, especially for giants seen in globular clusters of stars. Similar improvements are seen in the results for stars known to be lacking other heavier elements, and even some normal, Sun-like stars. The possible implications extend to estimating more accurately the amount of oxygen present in a solar nebula when exoplanets form.