The Quiet Intracluster Medium in the Core of the Perseus Cluster 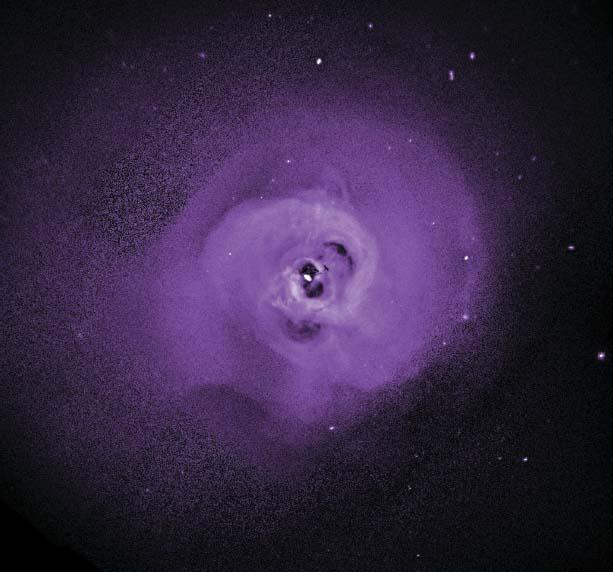 An X-ray image of the Perseus cluster of galaxies taken by Chandra. The central bubbles (dark regions) and ripples are associated with outflows from material that surrounds the cluster's central supermassive black hole. Astronomers using the (now lost) Hitomi satellite find that turbulence in the central region of the cluster is low, implying that errors in previous measurements of the masses of galaxy clusters using X-ray observations are small.

NASA/Chandra, Nature, and the Hitomi Collaboration

Most galaxies lie in clusters, groupings of a few to many thousands of galaxies. Our Milky Way galaxy itself is a member of the Local Group, a band of about fifty galaxies whose other large member is the Andromeda Galaxy about 2.3 million light-years away. The closest large cluster of galaxies to us is the Virgo Cluster, about 50 million light-years away, with about 2000 members. Clusters are the most massive gravitationally bound objects in the universe and consequently are key probes of cosmological parameters. Currently, astronomers think that galaxies form in a "bottoms-up" fashion, in which smaller structures develop first and large clusters only assemble later in cosmic history. How and when this proceeds, however, is poorly understood and depends on several competing physical processes, including the behavior of the intracluster gas. As clusters grow, they incorporate large quantities of very hot, inter-galaxy gas whose temperature is ten million kelvin or even much higher. There is more mass in the gas than there is in all the stars of a cluster's galaxies, and so the gas plays an important role in the cluster's evolution.

Last February, the Japanese Space Agency JAXA launched Hitomi, an international X-ray satellite designed among other things to study the hot intracluster gas. Unfortunately, Hitomi was lost shortly after launch, but before it failed it was able to study the hot gas in the one large cluster of galaxies, the Perseus Cluster. A large team of astronomers including CfA scientists Laura Brenneman, Adam Foster, and Randall Smith have just published their conclusions from this key observation in Nature.

The scientists studied the motions of the hot gas using Hitomi's uniquely high velocity resolution capability. If the gas were moving rapidly, then this energy might help support the material from gravitationally collapsing. Before Hitomi, astronomers assumed that such rapid kinematics were modest when compared with the thermal motions of the hot gas. The Hitomi results confirmed that this is indeed the case, and in fact finding that the kinematic motion was even smaller than previously expected. These results relied in part on a model of the X-ray emission provided by the CfA's AtomDB team.

The new work excludes the high velocity scenario, at least for Perseus, and since this cluster is thought to be representative the result means that related conclusions about cluster behavior and evolution are reliable.

"The Quiescent Intracluster Medium in the Core of the Perseus Cluster," The Hitomi collaboration, Nature, 535, 117, 2016.

A Massive Protocluster of Galaxies in the Early Universe

Massive Galaxies in the Early Universe

A New Bound on Axions