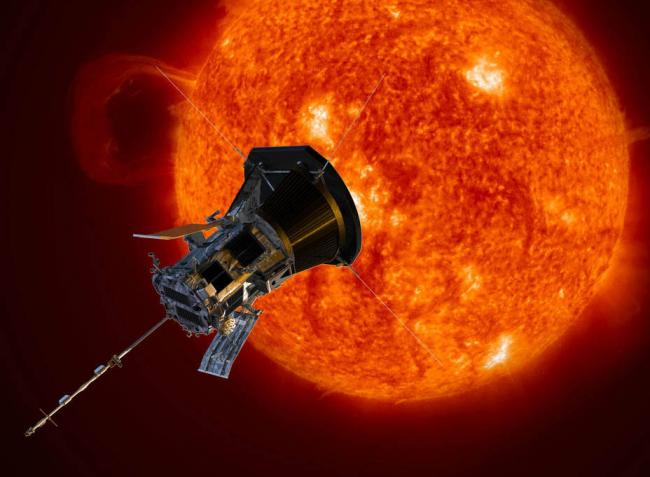 This illustration of NASA's Parker Solar Probe depicts the spacecraft traveling through the Sun's outer atmosphere.

This summer, NASA's Parker Solar Probe will launch from the Kennedy Space Center in Florida. This historic mission will travel almost 90 million miles, facing brutal heat and radiation, to become the first ever to "touch the Sun." Now, people around the world can submit their names to be placed on a microchip to go along for the ride. Understanding the Sun has always been a top priority for space scientists. Studying how the Sun affects space and the space environment of planets is the field known as heliophysics. The field is not only vital to understanding Earth’s most important and life-sustaining star, but it also supports exploration in the Solar System and beyond.

The Parker spacecraft, about the size of a small car, will travel directly into the Sun's atmosphere at speeds of about 430,000 mph (700,000 km/hr), which is faster than a speeding bullet. Eventually, Parker Solar Probe will enter an orbit that approaches to within only 4 million miles from the star's surface. (For context, the Earth averages a distance of about 93 million miles from the Sun during its elliptical orbit. Or, to put it another way, the spacecraft will travel about 96% of the way from the Earth to the Sun.) The current launch window for Parker Solar Probe, which will be carried into space by a Delta-IV Heavy rocket, is July 31 to August 19, 2018.

The primary science goals for the mission are to trace how energy and heat move through the solar corona and to explore what accelerates the solar wind as well as solar energetic particles. The mission will revolutionize our understanding of the Sun, where changing conditions can spread out into the solar system, affecting Earth and other worlds.

To perform these unprecedented investigations, the spacecraft and some of its instruments will be protected from the Sun’s heat by a thick carbon-composite shield, which will need to withstand temperatures outside the spacecraft that reach nearly 2,500 F.

However, not all of the instruments aboard Parker Solar Probe will be protected by this state-of-the-art heat shield. The Solar Wind Electrons Alphas and Protons (SWEAP) investigation is the set of instruments on Parker Solar Probe that will directly measure the hot ionized gas in the solar atmosphere during the solar encounters. To accomplish this, a key instrument on SWEAP called the Solar Probe Cup (SPC) was built at the Smithsonian Astrophysical Observatory (SAO) in Cambridge, Mass.

The SPC is a small metal device that will peer around the protective heat shield of the spacecraft directly at the Sun. It will face some of the most extreme conditions ever faced by a scientific instrument, and allow a sample of the Sun’s atmosphere to be swept up for the first time. The SPC uses high voltages to determine what type of particles can enter hence measuring the energy of the particle.

The SPC is crucial for probing the wind of hot ionized gas that is constantly produced by the Sun. As the spacecraft flies towards the Sun for an encounter, the wind is directed straight into the cup. This unique probe of the solar wind is important for scientists to better understand space weather. Without the SPC, Parker Solar Probe would miss most of what is in between Earth and the Sun.