The Space Weather Forecast for Proxima Cen B 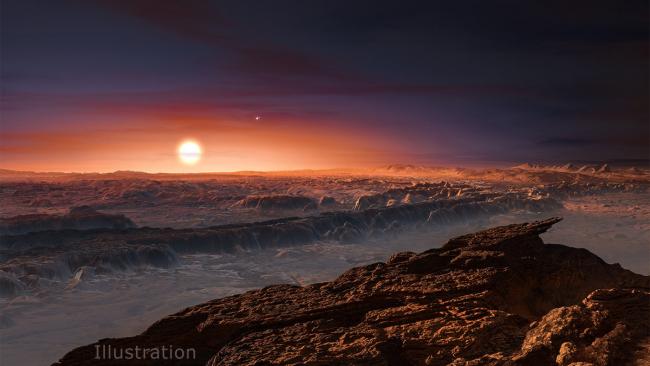 An artist's impression of the surface of the planet Proxima Cen b orbiting the M dwarf star Proxima Centauri, the closest star to the solar system. The double star Alpha Centauri AB also appears in the image.

Proxima Centauri, the closest star to the Earth (only 4.28 light-years away) is getting a lot of attention these days. It hosts a planet, Proxima Cen b, whose mass is about 1.3 Earth-mass (though it could be larger, depending on the angle at which we are viewing it). Moreover, Proxima Cen b orbits the star in its habitable zone. Proxima Cen itself is an M-dwarf star with a mass only about one-tenth the Sun's mass and a luminosity about one-thousandths of the Sun's; because the star is dim, the planet's habitable zone is twenty times closer to the star than the Earth's is to the Sun, and the planet orbits in 11.3 days. M dwarfs are the most abundant type of stars, and their small radii make them easier targets (relatively speaking) to spot transiting exoplanet signatures. Recent statistical estimates have concluded that half of M dwarf stars probably host an exoplanet between about 0.5–1.4 Earth-radii orbiting in or near their "habitable zone." Proxima Cen and its exoplanet, therefore, are important benchmark objects for understanding low-mass stars, their planets, and the planetary environments.

M dwarf stars pose a particular hazard to their planets: A large proportion of their radiation, much more than in Sun-like stars, is in the form of UV, extreme UV, and X-rays. This radiation can evaporate a planet's atmosphere, especially when those planets orbit nearby in the habitable zone. Indeed, the question astronomers ask is whether planets like Proxima Cen b can retain any atmosphere at all, at least over a long enough time for the planet to be "habitable" from any practical point-of-view. An addition danger is posed by the star's magnetic activity, which is not only responsible for the corrosive radiation but which also drives stellar winds and coronal mass ejections that could be even more perilous to atmospheric survival.

The photoevaporation of planetary atmospheres due to stellar radiation has been studied in limited situations, but not much effort has been devoted to the case of active M-dwarf stars and their magnetic activity. CfA astronomers Cecilia Garraffo, Jeremy Drake and Ofer Cohen have begun a program to model the stellar winds and magnetic field for active M-dwarf stars, and to investigate the impact on the atmospheres of planets in habitable zones. Proxima Cen is their first specific example. They found that the pressure of the stellar wind at the exoplanet was a thousand to ten thousand times higher than the solar wind pressure at Earth. Moreover, the pressure is highly nonuniform, and Proxima b will pass through these extreme pressure variations twice each orbit leading to the compression and expansion of its atmosphere by factors of up to 3 every day. The atmosphere of Proxima Cen b is also likely to experience supersonic wind conditions. All these phenomena will have a significant negative effect on any atmosphere that might vweekexist on Proxima b. The extent to which similar hostile conditions prevail on other M-dwarf exoplanets is a subject of further studies.