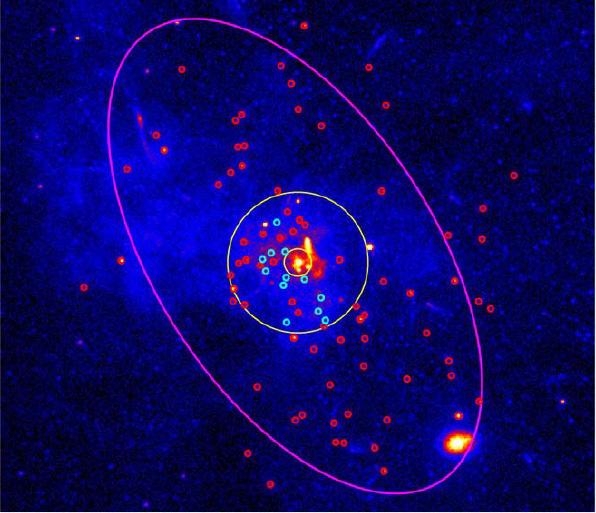 The central few light-years of our Milky Way. This X-ray image by Chandra shows the locations of some of the X-ray emitting point sources, including X-ray binary stars (cyan circles). A new analysis of archival Chandra data reports the first convincing evidence for this predicted, dense cluster of black holes.

The center of our Milky Way galaxy is about twenty-five thousand light years from Earth, in the direction of the constellation Sagittarius. At the core of the galaxy is a supermassive black hole with about four million solar-masses of material and around it, within a volume just a few light-years in radius, orbit hundreds of massive stars and probably hundreds of thousands of smaller, harder to detect stars. The whole region is invisible to us in optical light because of the extensive amounts of absorbing, intervening dust. Other wavelengths, however, including the infrared, radio, and energetic X-rays, can penetrate the veiling material and enable us to study this unique environment.

CfA astronomer Jaesub Hong was a member of a six-person team that used the Chandra X-ray Observatory to search for such binaries. They examined the equivalent of several weeks worth of archival Chandra observations obtained over twelve years, in an area corresponding to a volume that stretches to about sixty light-years from the galactic nucleus. In this region, thousands of X-ray point sources are seen, produced by a range of processes including hot gas, stellar atmospheres, binaries with white dwarf star members, neutron stars, and black holes. The innermost region itself, out to about twelve light-years, has hundreds of sources. (For comparison, the nearest star to the Sun is four light-years away.) The X-ray energies of the sources can be used to diagnose their character, but in this dense complex source confusion was a challenge. To minimize the confusion, the team focused on relatively bright sources, about one hundred of them, and also used simulations as a reality check. They found that twelve of the sources in the central dozen light-years had relatively "soft" X-ray spectra consistent with these sources being black-hole binaries. Although some alternative explanations cannot be ruled out (for example, a class of pulsars), the observed X-ray properties of these sources are the first strong evidence for the population of black hole binaries predicted to settle near the galactic center. The results suggest there are a larger number of (still undetected) isolated BHs present, and not least emphasize the complex and fascinating nature of this unique location in our galaxy.

"A Density Cusp of Quiescent X-Ray Binaries in the Central Parsec of the Galaxy," Hailey, Mori, Bauer, Berkowitz, Hong and Hord, Nature 556, 70, 2018.