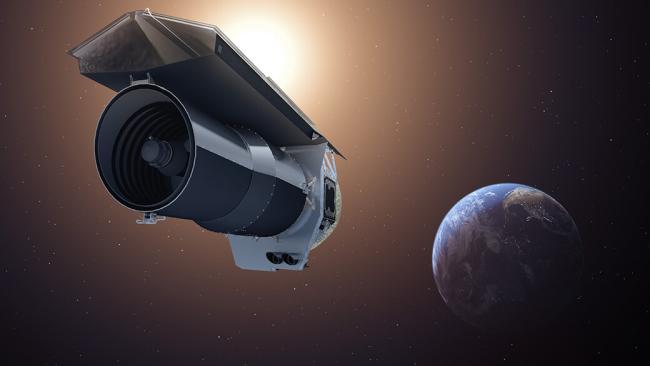 Artistic rendition of NASA's Spitzer Space Telescope in position to establish communications with Earth. Spitzer is 210 million kilometers (130 million miles) away from Earth, or about 1.5 times the distance between Earth and the Sun.

The Spitzer Space Telescope was named in honor of astrophysicist Lyman Spitzer, who promoted the idea of orbiting observatories in the 1940s. Launched into space in 2003, the observatory was the final NASA Great Observatory to be put in service, following the Hubble Space Telescope, the Chandra X-ray Observatory, and the now-inoperative Compton Gamma Ray Observatory. Unlike the other Great Observatories, Spitzer orbited the Sun directly at a distance far enough from Earth to keep our planet’s infrared light from interfering with observations.

As an infrared observatory, Spitzer collected light from regions of space that are hidden from optical telescopes, and it could detect light emitted from cooler objects. For example, Spitzer was able to peer through interstellar dust clouds that are both home and raw materials for star and planet formation. Scientists also used Spitzer to identify molecules and temperature variations in the atmospheres of giant exoplanets, spot brown dwarfs in orbit around other stars, and to identify supermassive black holes in distant galaxies by the matter swirling around them.

CfA astrophysicist Giovanni Fazio led the team that proposed, designed, built, and tested Spitzer’s main infrared camera IRAC, which took images at wavelengths between 3.6 and 8 millionths of a meter. Other contributors to IRAC included NASA’s Ames Research Center and Goddard Space Flight Center, the University of Arizona, and the University of Rochester. The IRAC science team is located at the CfA and worked with the operations center at Caltech.

Spitzer’s original observation program was intended to last two and a half years, but the telescope performed well enough to continue operating well past that deadline. Of Spitzer’s original three instruments, only IRAC operated after the exhaustion of its cryogenic helium supply until the telescope was retired in January 2020. The other two instruments were: the Infrared Spectrograph (IRS), for measuring the spectrum of infrared light at a wider range of wavelengths; and the Multiband Imaging Photometer for Spitzer (MIPS), which operated at the long-wavelength end of the infrared spectrum. 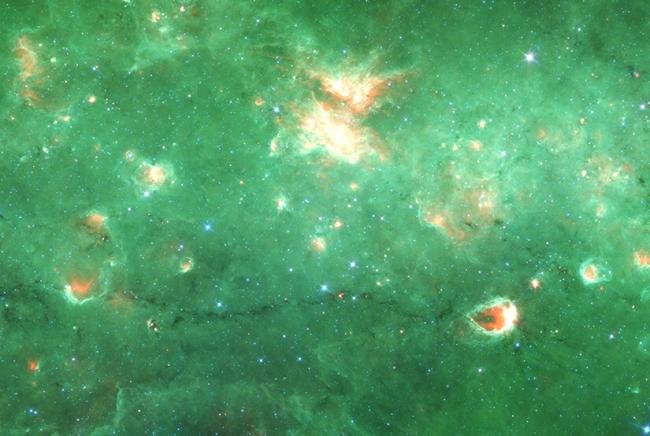 Astronomers used NASA's Spitzer Space Telescope to identify the first "bone" of the Milky Way, the dark tendril of dust and gas in this image. The "bone" is a type of filament that makes up structures seen in other spiral galaxies.